Boris Johnson out of UK PM race as Gove steps in 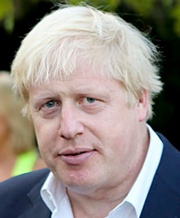 The question of who will lead Britain into its future outside the European Union remains a muddle, with the camp that had pushed for a Brexit splintering into warring tribes as long time former London mayor Boris Johnson has been forced out of the contest.

With the deadline for entering the contest to occupy 10 Downing Street just hours away, the race had been shaping up as a likely standoff between Johnson, the mop-headed 'rogue' who favoured "leave" and Theresa May, the no-nonsense domestic security chief who had backed "remain".

But Michael Gove, the bookish Justice Secretary who was regarded as the intellectual architect of the "leave" campaign, shocked the country's political establishment on Thursday morning by announcing that he too would enter the fray.

Gove had been expected to serve as Johnson's campaign manager, uniting the two men who had been the most prominent Conservative backers for Brexit, as a British departure from the EU is popularly known.

But he apparently had a last-minute change of heart, saying Thursday morning that he had come "to the conclusion that Boris cannot provide the leadership or build the team for the task ahead".

Gove, who has been nearly invisible since last week's referendum to exit the EU, did not release any detailed vision for the country's future. He said his "plan for the United Kingdom which I hope can provide unity and change" would be released "in the coming days".

Johnson, who had widely been considered the favourite to take the keys to Downing Street, has also made himself scarce since the vote, largely avoiding the media.

But in a speech late Thursday morning, just minutes before the noon deadline for entering the campaign, Johnson said he would not run - an extraordinary development for a man who has made little secret that he covets the top job in British politics.

Gove's decision to stand for prime minister, despite earlier support for Johnson, is just the latest in a Shakespearean string of betrayals at the highest reaches of British politics, says The New York Times. First Johnson and Gove turned their backs on Cameron, their friend and sparring partner since their days at Oxford. Then Gove, who campaigned for Brexit beside Johnson for months, turned the knife on the former London mayor.

"You couldn't make it up," Tory member of Parliament Nigel Evans told the BBC. "It makes the House of Cards look like Teletubbies."

Evans said he would continue to back Johnson. But a number of prominent supporters of the former London mayor almost immediately switched their allegiance to Gove.

Gove had said repeatedly throughout the campaign that he had no interest in becoming prime minister, claiming he was temperamentally unsuited for the job.

Johnson's malleable politics, and reputation for opportunism, have led to mistrust among hard-core Brexit backers, who have never been sure he was ideologically devoted to the idea of leading Britain out of the EU.

A column Johnson wrote in the Daily Telegraph this week in which he seemed to back away from calls for tougher restrictions on immigration only solidified those fears.

Gove, by contrast, is considered a devout Brexiteer whose ideological commitment to the cause is beyond reproach.

May's case for unity
The Gove announcement overshadowed May's own declaration that she would run for Britain's top job. But it may end up helping her.

As the "leave" camp split, May presented herself as a "unity" candidate who, despite backing "remain", could bring together the badly fractured Conservative Party.

She was introduced Thursday by Chris Grayling, a prominent Tory Brexiteer, and advertised herself Thursday as the candidate best prepared for the tough talks ahead with EU leaders, having spent years wrangling with other European security chiefs as the country's home affairs minister.

"I have not just done it. I've delivered on those negotiations," she said.

Despite supporting "remain," May said there would be no going back on Brexit. She was considered only a reluctant EU backer, with a long record of Euroscepticism and a hard line against mass immigration.

May would be the second female prime minister in British history, after Margaret Thatcher. May's unsmiling public persona and hardline conservative politics have drawn occasional comparisons to the Iron Lady.

No public vote
Britain's next prime minister will not be picked by the general public. Instead, he or she will be selected in a two-stage process within the ruling Conservative Party. First, the party's members of Parliament will whittle the field - which includes a number of dark-horse candidates - down to two. Then the party's rank-and-file members will select the winner.

Whoever emerges will take over from outgoing Prime Minister David Cameron on 9 September. Cameron said last Friday that he would step down as PM, having led a losing campaign to keep Britain in the EU (See: Cameron quits as PM; Scotland, Ireland in turmoil). Cameron has said he will not formally trigger Britain's exit and will leave that task to his successor. Once the next leader invokes Article 50 of the Lisbon Treaty, the never-before-used mechanism by which EU members can leave the bloc, the next prime minister will have two years to negotiate a new deal with the 27 remaining members.

Europe won't soften
Europe signalled Wednesday that it will drive a hard bargain, refusing to budge on likely British demands that the bloc relax freedom of movement for workers across national borders. European leaders say that if Britain wants access to the single market, it will have to accept free movement.

Ever since last Thursday's vote, the Brexit camp has been silent on how it can deliver on the promises it made during the referendum campaign.

Gove, May and other candidates will now spend the summer jostling over who can get the best possible deal amid the political and economic wreckage wrought by last Thursday's vote.

Labour turmoil
The internal warfare among Tories has been matched - and exceeded - within the opposition Labour Party.

Pressure continued to build Thursday on party leader Jeremy Corbyn to resign, with a likely challenge emerging from one of his former top lieutenants, Angela Eagle.

On Wednesday, the country's last Labour prime minister, Corbyn's predecessor as Labour leader, and Cameron all urged Corbyn to step aside.

The calls came just a day after Corbyn suffered a humiliating defeat at the hands of his fellow Labour members of Parliament, with 172 of them expressing no confidence in his leadership through a secret ballot. Only 40 backed the leftist politician.

The comment elicited rapturous cheers from Cameron's Conservative benches and silence from Labour.

Despite his fast-crumbling position, Corbyn continued to cling to what remains of his power. He has steadfastly refused to step aside, even as the Labour Party has veered toward a possible breakup if he won't go.

The stalemate is part of the continuing fallout from Thursday's referendum. Cameron said hours after the vote that he would step down, having led a failed "remain" campaign. But Corbyn has refused to accept responsibility for what critics see as his key role in the "remain" campaign's defeat. Although the north London politician was ostensibly in favour of Britain staying in the EU, he was an indifferent campaigner. And "leave" won in Labour heartlands that had been seen as critical to any hope of avoiding a British exit from the EU.

Cameron on Wednesday attacked Corbyn directly for a lacklustre effort. "I know the honourable gentleman says he put his back into it," the prime minister said as Corbyn sat frowning on the opposite bench in the House of Commons. "All I'd say, I'd hate to see him when he's not trying."

Cameron said that it helped the Tories for Corbyn to hang on but that "it's not in the national interest."

Brown, who resigned as prime minister in 2010, told Sky News that Corbyn had lost the faith of his parliamentary colleagues and predicted he would ultimately step aside.

Miliband, a former Corbyn backer, warned on Facebook that he was creating "a wrecked, divided party."

With Corbyn refusing to budge, some of Labour's more moderate members have explored creating a splinter party.

Corbyn's election to the leadership in September was a lurch to the left for a party that governed from the center-left for 13 years under Brown and Tony Blair.