David Cameron has resigned as British prime minister following the failure of his Remain campaign to win the referendum on staying in the European Union. 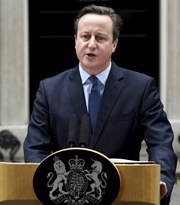 ''I do not think it would be right for me to be the captain that steers our country to its next destination,'' he said.

Speaking outside 10 Downing Street, he said the British people had made a choice ''that needs to be respected'' and that all sides, both Remain and Leave have a duty to make the new situation work.

''Now that the decision has been made to leave, we need to find the best way,'' he said.

Cameron said it was not a decision he took lightly, and that he expected a new prime minister to be in place before the Conservative Party conference in October.

Cameron called the vote on Brexit in 2013 under pressure from the anti-EU wing of his Conservative Party and the far-right Ukip, hoping to end decades of debate over the UK's ties with Europe.

During his resignation speech, he moved to reassure both UK citizens living in the EU, and EU citizens in the UK that there would be ''no immediate change in circumstances''.

The United Kingdom voted to leave the European Union after 43 years, plunging the region and its neighbours into an uncertain future and shocking international financial markets.

The result surprised Leave campaigners as well as most pollsters and political analysts.

London, Scotland and Northern Ireland voted strongly to remain in the EU. But there were big majorities for Leave in other parts of the country, particularly in the north of England, and Wales and the English shires also backed Brexit (See: It's Brexit as UK votes to leave European Union)

More than 30 million people voted in the referendum and the turnout of 72.2 per cent was the highest for any UK-wide vote since 1992.

''Dare to dream that the dawn is breaking on an independent United Kingdom,'' he said.

Scottish question
Scotland's first minister Nicola Sturgeon, who has long said that a vote for Brexit against Scotland's wishes could trigger a second independence referendum, said the result made clear what Scotland wanted.

''Scotland has delivered a strong, unequivocal vote to remain in the EU, and I welcome that endorsement of our European status. And while the overall result remains to be declared, the vote here makes clear that the people of Scotland see their future as part of the European Union,'' she said.

When polls closed at 10pm last night, with polls pointing to a clear Remain victory, Farage came close to conceding defeat. But when Newcastle backed Remain with a smaller than expected margin and Sunderland backed Brexit with a thumping majority, it became clear that Leave was in for a good night.

The result was unusually polarised, with parts of London voting by margins of three to one in favour of remaining in the EU, while other parts of England voted heavily for Brexit.

Implications for Ireland
The British decision to leave the European Union '' clearly has very significant implications for Ireland'', the government has said in a statement as the Cabinet prepares for an emergency meeting. In what is effectively a holding statement, the government said it ''notes the outcome of the UK-EU referendum this morning''.

''This result clearly has very significant implications for Ireland, as well as for Britain and for the European Union.''

The Irish cabinet will hold an emergency meeting this morning to ''reflect on'' the fallout of Britain's decision to leave the European Union.

The government will also begin to prepare for the impact of Brexit on Ireland, the prospect of which was repeatedly described as an almost nightmare scenario by ministers and officials in Dublin.

Markets in turmoil
Irish and other European shares are set to plunge on Friday morning as investors digest Britain's decision to leave the EU.

The pound fell more than 10 per cent against the dollar to levels last seen in 1985, its biggest one-day fall in history, and European shares plummeted more than 8 per cent, headed for their biggest ever one-day fall.