'Yogi' Deveshwar to step down as ITC chief in February

Yogesh Chander Deveshwar, who led tobacco company ITC Ltd to a diversified group with interests in farming to hotels and information technology over a 20-year period – the longest in Indian corporate history – is finally stepping down. 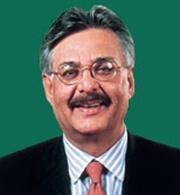 Deveshwar will step down as executive chairman and CEO of the company from February next year. He is likely to continue as non-executive director and chairman for a period of three years.

In a notice to shareholders for their upcoming AGM on 22 July,  ITC said it will seek shareholders' nod to appoint him as a non-executive director and chairman for a period of three years with effect from 5 February 2017.

Deveshwar, 69, joined ITC in 1968 and has been at the helm of Asia's second-largest tobacco company by market value since 1996. He will relinquish the chief executive role in February and attend his final shareholders' meeting as CEO next month, the company said in a regulatory filing on Tuesday.

ITC's board of directors ''strongly urged'' Deveshwar to remain CEO, yet he wanted to turn the job over to a younger executive, ITC said. The company did not say who would replace him.

Deveshwar has expressed ''his desire to shed the executive role'' and ''put in place a youthful leadership at the helm in the longer term interest of the company,'' the release stated.

Deveshwar has agreed to provide guidance and mentorship to the new executive management, that is planned to be put in place, as non-executive chairman on expiry of his current term, it added.

ITC expanded rapidly under Deveshwar, growing revenue tenfold while its shares soared more than 4,200 per cent. Under Deveshwar, ITC continued to reduce its reliance on cigarettes, diversifying into other consumer products such as soaps and snacks, emerging as the leading consumer goods company with a portfolio spanning foods, apparel and incense.

Deveshwar led ITC's transformation from a cigarette maker to a diversified group with presence across FMCG, hospitality, paperboard and packaging, IT and agri business. Under his stewardship, the company also created several world-class Indian brands in the FMCG space.

The company, however, still relies on tobacco for most of its profits.