Angela Merkel is Forbes Woman of the Year for 6th time

For the sixth consecutive year, German Chancellor Angela Merkel was named the world's most powerful woman by Forbes. Merkel is also the reigning Time Person of the Year. 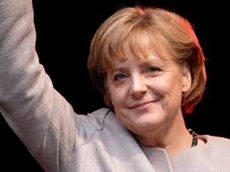 Merkel beat Hillary Clinton, who the Associated Press the presumptive Democratic nominee for US president. The former secretary of state came second on the Forbes list.

"If there is a single leader able to defy existential economic and political challenges to the European Union, from edges and core, it has been German Chancellor Angela Merkel," Forbes explained. "But her latest act may be the boldest. By opening Germany's borders to over 1 million immigrants from Syria and other Muslim countries in the last several years, Merkel has decided to wield her power with the most curious of geopolitical strategies: sheer humanism.''

Forbes said of Clinton that should she win the American presidency in November, she could likely move to the top spot.

"She remains the presumptive Democratic contender in the elections this fall, and her unflappable and tenacious pursuit of the country's highest office keeps her at spot No. 2 on this year's list, with a clear shot at number one if she wins the nation's vote." Forbes said.

Clinton finished second in 2011 as well.

The Forbes list came out before the AP reported Clinton had secured the Democratic nomination Monday night. Rival Bernie Sanders contested that assessment. Clinton's campaign argued Tuesday's contests should conclude before making any calls on the race. Clinton believes she will be the eventual nominee, however, and AP's finding makes Clinton likely the first female major party presidential nominee in history.

Federal Reserve Chair Janet Yellen was named the third most powerful woman in the world. Yellen is the first female Fed chair in history. Melinda Gates of the Bill and Melinda Gates Foundation is ranked fourth and the chief executive of General Motors, Mary Barra, makes up the top five.

Scotland's First Minister Nicola Sturgeon was ranked 50th in the annual list compiled by Forbes, which pointed to her increasing popularity demonstrated by a 2015 poll which found her the most popular person by voting Scots.

The ranking of Sturgeon in the list determines her as the second most powerful women in the UK, one place behind Queen Elizabeth II who was listed at number 29.

The magazine credits the women on the list as being ''the smartest and toughest female business leaders, entrepreneurs, investors, scientists, philanthropists and CEOs making their mark in the world today''. Forbes takes into account each individual's net worth, media presence, spheres of influence and impact in the women's respective field.

Last year's list saw appearances from high-profile entertainers like Taylor Swift, Angelina Jolie and Ellen DeGeneres; however, this year the 'celebrity' category was removed from the overall list to ''make more room for the women breaking into politics'', according to Forbes.

Other British women who make the list include the deputy governor of the Bank of England, Nemat Shafik (59), the Chair of Universal Pictures, Donna Langley (67), the editor of The Guardian, Katharine Viner at 68, editor-in-chief of The Economist, Zanny Minton Beddoes at number 78 and the Chair of the Wellcome Trust, Eliza Manningham-Buller(88).

Notable women from last year's list who were not ranked this year include the President of Brazil, Dilma Rousseff, who is currently facing an impeachment trial and the CEO of Theranos Elizabeth Holmes - Forbes recently valued the former billionaire's net worth to be zero.