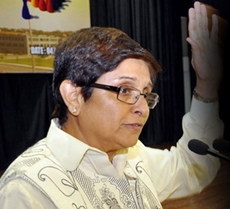 "The President of India is pleased to appoint Kiran Bedi to be the Lt Governor of Puducherry with effect from the date she assumes charge," it said.

The Congress-Dravida Munnetra Kazhagam (DMK) alliance returned to power in the union territory after the 16 May elections to the 30-member assembly.

The first woman to join the Indian Police Service (IPS) in 1972, Bedi has held key positions in her career, including Inspector General (Prisons) at Delhi's high-security Tihar jail.

Known for her administrative experience and integrity, her work in Tihar Jail, one of Asia's largest jails, won her the Ramon Magsaysay Award for Public Service in 1994.

She was credited with introducing yoga, meditation, a literacy drive, computer skills, feedback boxes for the inmates during her stint at Tihar and is often said to have successfully transformed the prison into a "reformatory".

Bedi has also courted controversy during her police service.

While working as deputy commissioner of police (traffic) in 1982 during the ninth Asian Games, she was nicknamed 'Crane Bedi' for extensive use of towing cranes to tow away wrongly parked cars.

Bedi also had a stint as director general of police in Mizoram as well as being the Chandigarh Inspector General of Police for a very brief period.

In 2003, Bedi became the first Indian woman to be appointed police advisor to the United Nations Secretary General, in the Department of Peace Keeping Operations, till 2005.

She later partnered with social activists Anna Hazare and Arvind Kejriwal in their movement against corruption and formed the India Against Corruption for a strong Lokpal in 2011.

She later joined the Bharatiya Janata Party ahead of the February 2015 Delhi assembly polls and was named the party's chief ministerial candidate.

After joining the BJP in January 2015, Bedi had said, "Mujhe kaam karma aata hai. Kaam karana bhi aata hai (I know how to work; I know how to get work done too)".

However, the BJP was virtually wiped out in the Delhi assembly elections, winning only three seats in the 70-member assembly. She herself lost in the Krishna Nagar constituency in east.

Her latest appointment is widely seen as a move by the BJP-ruled centre to have a party person keeping an eye on affairs in opposition-ruled territory.