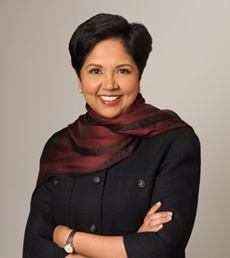 Asserting that women in workplaces and society deserve equal treatment, PepsiCo's India-born chief executive Indra Krishnamurthy Nooyi today said she hates being called "sweetie" or "honey" and women should be respected as individuals and not addressed with such epithets.

"We still have to have equal treatment. I hate being called sweetie or honey at times which I still am called. All that has got to go. We have got to be treated as executives or people rather than honey, sweetie, babe. That has to change," Nooyi said on Friday at the 'Women In the World' Summit presented by renowned journalist and author Tina Brown in association with The New York Times.

Nooyi said women have been in "revolution mode" for "many many years", from getting entry into the "boys club" to demanding parity in pay.

She said women have "clawed" their way into the workplace by getting their degrees, good grades in school, which made the male counterparts "take note of us".

"We clawed our way into the revolution in this work place. Then we needed parity in pay, not yet there - we are still fighting for that," she said.

Nooyi, however, lamented that women do not help other women in the workplace as much as they should and asked women to make sisterhood more strong.

"There is a bigger issue we have to talk about. I don't believe women help women enough in the workplace. Let's figure out how we can help each other way more than we are today," Nooyi said.

She said experts need to address why women compete with women too much in the workplace when they should instead be helping each other out. She also pointed out that women often do not take feedback from other women positively.

"We assume feedback from women means something is wrong but if that same feedback came to us from men we are willing to accept it or worse still we don't give the feedback to women the way we should," she said.

"I think we have to change our whole approach to supporting each other taking advice from each other, seeking it out," she said. "The sisterhood has to become way stronger than it is today."

She said that while there is interaction of helping women in the workplace, the fact that has been ignored is how to help this interaction between the woman and her personal life as she assumes the role of a daughter, wife, mother and daughter-in-law.

Nooyi, among the most powerful and influential businesswomen in the world, said companies and individuals have not yet talked about the "big revolution" of how societies, governments, companies and families help women as they give birth, take care of young children and aging parents and at the same time manage a career.