The barely literate poet who has inspired 5 PhDs

If one talks of Indian prodigies, one can't fail to mention poet Haldhar Nag, the Odiya poet who was awarded the Padma Shri last week. A class three dropout, he can barely be considered literate – yet he has had five PhD theses written about him! 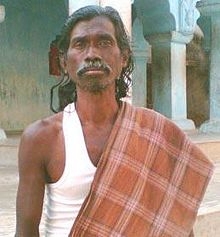 The 66-year old poet was awarded one of the highest civilian honours by President Pranab Mukherjee. Nag writes in the Kosli language and has penned 20 epics and numerous poems - and he says that he remembers all of them! Now, the Sambalpur University is also coming up with a compilation of his writings. The book will be titled Haldhar Granthabali-2 and will become part of the University's syllabus.

A close associate of the poet told The Times of India, ''He remembers whatever he writes and has been reciting them (his poems). You just need to mention the name or subject. He never misses anything. Now he attends at least three to four programmes every day to recite his poems.''

Speaking to the newspaper, Nag said, ''It's great to see the huge interest of young people in poems in Kosli. Everyone is a poet, but only a few have the art of giving them shape.''

Even after getting the recognition he has, Nag still leads an austere life and can always be seen in a white dhoti and a vest, without any footwear.

Nag was born in a poor family in Ghens in Bargarh district of Odisha and attended school only till class 3. He dropped out of school at the age of 10. He started working as a dishwasher at a local sweet shop. But later things started looking up a bit for him.

Two years later, the village head took him as a cook in the high school, where he worked for 16 years. ''But soon, a number of schools came up in the area. I approached a bank and got a Rs1,000 loan to start a small shop selling stationery and eatables for school students,'' Nag said. It was during this time that he wrote his first poem Dhodo Bargachh (The Old Banyan Tree) in 1990 and it was published in the local magazine. He never looked back after that, as he got recognition and that in turn encouraged him to write more.

Nag who is called 'Lok Kabi Ratna' in Odisha has written on nature, society, mythology and religion, apart from taking up the cause of the oppressed.

Even though he might not have attended school, his works have gone even beyond them. A collection of his works titled Haldhar Granthabali-2 will be soon published by Sambalpur University and it will be a part of their syllabus.