Veteran Australian ultra-marathon runner Pat Farmer today finished his fundraising two-month long ''Spirit of India'' marathon – running from the south to the north of the country – a day earlier than expected. 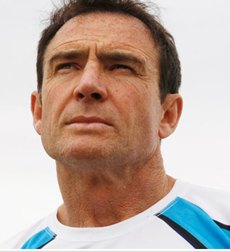 The 54-year-old covered 4,400 kilometres, running an average of 80 kilometres a day for 64 days, to promote India-Australia friendship and more importantly to raise money for disadvantaged girls.

Education has been close to Farmer's heart, as he had to leave his schooling at 14 to start working. Earlier this month, Farmer told domain-b in an exclusive interview: "I realised that if you educate girls, then you end up educating future mothers and mothers are usually the first educators of their children." (See: Promises to keep … and miles to go before he sleeps )

He has run through the Middle East, Antarctica and all around Australia but nothing could prepare Farmer for his epic 4400km trek from India's south to north.

On his fifth pair of shoes and having battled sore hips and severe stomach cramps throughout, the ultra-marathon runner met his quest in the heavily guarded Kashmir region on Tuesday.

Looking like a modern-day Forrest Gump, with up to 200 locals running behind him at a time, Farmer has been raising money, awareness and hope for disadvantaged girls' education in India.

Despite being hospitalised with severe dehydration on day two, the 54-year-old has slogged through the equivalent of two marathons each day for 63 days and survived all sorts of weather conditions and terrain.

''There's been no other run on earth that I've ever done – and I've done some amazing things – like this,'' Farmer told AAP from the foothills of the Himalayas on the last leg of his run.

''I've never run through a country with so much diversity. It's been like that every step of the way. You go around the corner and the landscape changes, the language changes, the religion is different.

''And it's such a sensory overload. The smells, the taste, the foods, the weather conditions, and the people themselves.''

The former federal MP and Australian education and sports minister finished his ''The Spirit of India'' run, which began on India's Republic Day on 26 January – which was also Australia's National Day - after making a quick ''sprint'' for home (Marathon man Pat Farmer to run from Kanyakumari to Kashmir).

Speed bumps
He had been scheduled to finish on Wednesday but rockslides and mudslides due to the warming temperatures in the mountains have Indian authorities poised to cut the roads into his final destination at Srinagar.

''I bumped up the speed just to make sure that we arrived at the finish,'' he said. ''I went through knee-deep mud yesterday and climbed over fallen rocks that had been on the road and stopped the traffic.''

Farmer said his experience in Antarctica had helped in the freezing conditions he encountered – two months after starting in 37°C heat and humidity in India's southern-most tip at Kanyakumari.

''It's a complete contrast now,'' he said. ''There's snow all around me and I'm near the top of a mountain.

''I started in 88 per cent humidity. It was hot when I was preparing in Sydney. But you can't train for that. The humidity sapped all my energy straight away.''

Speaking to the ABC shortly after crossing the finish line on Tuesday afternoon, at Srinagar in the foothills of the Himalayas, he spoke of his sheer relief and exhilaration.

"I feel absolutely elated ... this has been an incredible journey," he said.

"The Indian High Commissioner back in Australia said to me: 'Pat, if you do this run it will be the biggest and the greatest run you ever do' ... and he's absolutely right ... he's 100 per cent correct.

"The scenery here changes so regularly, I can understand why they call it 'the incredible India'.

"It's been a struggle but it's been fantastic and really worthwhile."

"I was desperate enough to want to push on harder and faster and further than I would normally on some of those days because I was worried that we might get to the stage where they wouldn't let us finish at all because the roads were too dangerous," he said. "My crew went the long way around and caught up with me.''

After crossing the finish line, Farmer said his body was "feeling fantastic at the moment", "but will probably collapse in about another 15 to 20 minutes".

"It's just one of the greatest feelings on Earth to see a plan in your head and then take it to a piece of paper in the form of a map on my kitchen table at home, and then trace it through and to look at names and places that you've never heard of before, or even imagined, and turn into a run that's affected literally millions of people over here and touched the lives of so many," he said.

"It's also been probably one of the most significant diplomacy missions between Australia and India on a grassroots level. That's what the Indian press has referred to it as anyway."

'A beer ... and a bath'
Farmer said he had accepted that "you need to be comfortable with being uncomfortable in this running business", but said it was likely "various injuries and bruises and aches and pains" would become obvious in the next few days.

"But for the moment everything's pretty good and everything still works," he said.

The former motivational speaker said he was staggered by the numbers of people who ran alongside him.

"Hundreds of thousands of people literally joined me from time to time on the road," he said.

''It's been out of control, the traffic has been crazy, and without the army and police force to monitor all of that it simply wouldn't have happened."

Farmer urged people to donate and help fund the education of disadvantaged girls in India.

"We can make a huge difference to these kids, and I've seen them face to face, and I'll be fundraising for them for a long time to come," he said.

For now, Farmer said, he was dreaming of "a big black forest cake and a beer".

"Maybe I'll have the black forest cake while I'm in the bath," he said, laughing.