US Republican front-runner Donald Trump warned on Wednesday of riots if he is denied the party's presidential nomination after a string of primary election victories, raising the temperature even further in a highly charged White House race. 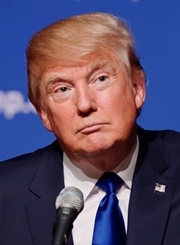 The New York billionaire scored big wins in primaries in Florida, Illinois and North Carolina on Tuesday which brought him closer to the 1,237 delegates he needs to win the nomination.

But Trump lost the crucial state of Ohio and left the door open for those in the party trying to stop him from becoming the Republican nominee for the 8 November election. Trump might fall short of the majority required, enabling the party establishment to put forward another name at the July convention in Cleveland to formally pick its candidate.

Party leaders are appalled at the real estate developer and reality TV personality's incendiary rhetoric and believe his policy positions are out of step with core Republican sentiment, such as his vow to deport 11 million illegal immigrants, temporarily ban Muslims from the United States and build a wall along the border with Mexico.

Trump told MSNBC's Morning Joe show on Wednesday that he mostly consults himself on foreign policy issues. "I'm speaking with myself, number one, because I have a very good brain," he said. "I know what I'm doing ... my primary consultant is myself, and I have a good instinct for this stuff."

He also told Fox News he would not attend the next televised Republican presidential debate, scheduled for 21 March. "I think we've had enough debates," Trump said.

The Republican establishment's bid to stop him may have come too late as a field of candidates that once included Trump and 16 high-profile party figures has dwindled to only three, with Trump, 69, in command ahead of US Senator Ted Cruz, 45, and Ohio Governor John Kasich, 63, who won the Ohio Republican primary on Tuesday.

While the Republican race remained in turmoil, Hillary Clinton won victories in Florida, Illinois, Ohio and North Carolina on Tuesday that cast doubt on US Senator Bernie Sanders' ability to overtake her for the Democratic Party's nomination.

Trump's landslide victory in Florida knocked rival Marco Rubio, a US Senator from that state and a foreign policy hawk, out of the White House race.

Kasich is the last establishment Republican candidate standing. Asked whether he would work with Cruz to block Trump's path to nomination, he told NBC's Today show, "I'm out there running to be president. I'm not out to stop Donald Trump or stop anybody else. by winning yesterday in Ohio, I've dealt him a very, very big blow to being able to have the number of delegates."

Early on Wednesday, MSNBC projected Trump and Clinton would win Missouri in very tight races. With 100 per cent of the votes counted, Clinton led Sanders by about 1,500 votes and Trump led Cruz by about 1,600 votes.

It would not be the first time Trump skipped a debate if he follows through on his plan. He also sat out the Fox News/Google debate on 28 January, after complaining of unfair treatment in a previous Fox debate.