On a day when a panel of Delhi's Jawaharlal Nehru University recommended the rustication of Students' Union president Kanhaiya Kumar and several of his fellow-students, the Delhi High Court today refused to entertain a plea seeking action against Kumar for allegedly making anti-national remarks after being released on interim bail in a sedition case. 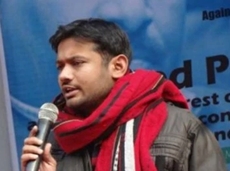 Justice Pratibha Rani declined to give the direction sought by a social activist on the ground that there is a law and order mechanism in the country which will take care of if any anti-national slogans being raised, and the petitioner need not worry about the image of the nation.

It also questioned the locus of the petitioner for filing the present petition seeking direction to take action for sedition allegedly committed by Kanhaiya and to refer the matter for further investigation by Intelligence Bureau in the interest of justice.

The court also sought the presence of petitioner Dev Dutt Sharma so that he is aware of the cost which may be imposed on him for filing this writ petition.

Following this, advocate Sugriva Dubey wished to withdraw the petition and the court treated it as dismissed and withdrawn.

The petition has alleged that after being released from judicial custody, Kanhaiya has again indulged in anti-national slogans and used the word ''azadi'' at least 100 times in his speech recently.

It said fundamental right for free speech never gives a right to speak against the national interest.

Kanhaiya was granted interim bail for six months by the high court on 2 March in the sedition case.

JNU students Umar Khalid and Anirban Bhattacharya, arrested in the sedition case over a controversial event in the varsity's campus, are presently in judicial custody.