Beef ban comment could cost me my job: Subramanian

Days after he warned of social divisiveness hurting development, the union government's chief economic adviser Arvind Subramanian on Tuesday refused to answer a question on the beef ban in various states including Maharashtra, saying he did not want ''to lose his job''. 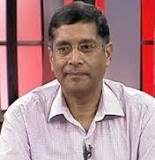 ''You know that if I answer this question I will lose my job. But thank you nevertheless, for asking the question,'' he said while interacting with students of Mumbai University.

He had been asked if the beef ban will have any adverse impact on the farmers' incomes or the rural economy, and his reply was met with a round of applause.

The remark by Subramanian, who is on leave from the Peterson Institute for International Economics in Washington since October 2014, comes days after he spoke about the adverse impact of social tensions on development.

''The way you react to social cleavages has a critical impact on economic development. India is a wonderful example. What have reservations done, what have they not done, what religion has done, what has it not done, illustrate the general principle that these things have a huge impact,'' he had said during a lecture in Bengaluru.

Beef bans became a national issue after a man was lynched by a mob on the outskirts of the national capital last year on suspicion of stocking beef at house.