Amid the raging debate on nationalism in the wake of the Jawaharlal Nehru University row, noted historian Romila Thapar on Sunday said efforts are being made to "obfuscate" the definition of nationalism, which is based on "reliable history" and not just on "anyone's fantasy about the past". 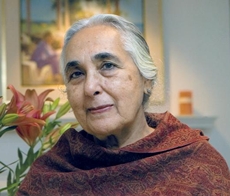 "Today efforts are being made to obfuscate the existing definition of nationalism. Nationalism draws on reliable history and not just on anyone's fantasy about the past.

"Critical enquiry, as we all know, is essential to the advancing of knowledge. It is expected of a university to critically enquire into what the public may claim this knowledge to be," she said in her address to the students at JNU.

"Nationalism draws on the identity of a citizen which is pre-eminent but cannot be an identity claimed as superior by any single group, it has to include equality of all - the equal rights of citizens. Incisive debates on this are part of the nationalist enterprise which is part of the ongoing enterprise of the relationship between history and nationalism and universities are obvious place for such debate," she said.

Thapar's lecture titled "History and Nationalism: Then and Now" was part of the "nationalism teaching" series which is being conducted at JNU. The university is caught in a row over a 9 February event at which allegedly anti-national slogans were shouted.

The classes are being held at the universtiy's administrative block.

"Nationalism doesn't exist on one identity, it is all inclusive. National history of course has its moments of joy, it goes to the past and golden age and utopian age, but whatever national identities superseded existing identities, if it is inclusive it is generally much healthier but if it pretends to be exclusive then it could be a disaster," she said.

Thapar, a professor emeritus at JNU, referred to herself as a "dinosaur of JNU" while talking about how she joined the university in 1970.

"Various theories have been put about origin of Aryans. Max Mueller said they came from central Asia. Dayanand Saraswati said they came from Tibet. Tilak as we all know was much more adventurous and suggested the Arctic regions. When it became fashionable in the 1920s to talk about Aryans being indigenous to India, it was a little embarrassing to have Tilak talking about the Arctic circle and someone had the bright idea of saying that in those days in Vedic times, the North Pole was actually located in Bihar," she said, with a touch of humour.

Thapar has been maintaining that the current nationalism issue at JNU over an event against the hanging of Parliament attack convict Afzal Guru in 2013 will not have an impact on the varsity's future as there is a lot of intellectual support for the institution from across the globe.

Thapar also said that even though she was "deeply depressed" since the last one month over "attempts at breaking JNU", she was feeling much better now.