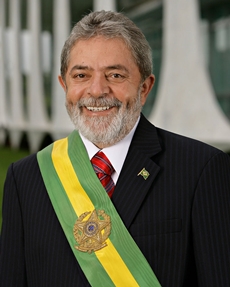 Former Brazilian president Luiz Inacio Lula da Silva was detained for a short period for questioning yesterday in a federal investigation relating to corruption in a government scheme, which has sparked a political crisis that threatens to topple his successor, President Dilma Rousseff.

Officers of the Federal Police swarmed De Silva's (more popularly known as Lulla) home in Sao Paulo early at 6 am. He was taken to a federal police station, but was not arrested or charged. Lulla was released after about three hours of questioning, which he later derided as a ''media show.''

The action marks the highest profile development in a two-year-old graft probe related to the state oil company Petrobras, which has hit Brazil's political and business establishment and worsened the recession in Latin America's biggest economy.

The investigation could end up deeply tarnishing the legacy of Brazil's most powerful politician, whose humble roots and anti-poverty programmes made him a folk hero, by putting a shining a bright light on the politics of the Workers' Party since it assumed power 13 years ago.

Police called on Lula at his home on the outskirts of Sao Paulo and released him after three hours of questioning. They said evidence suggested Lula had received illicit benefits from kickbacks at the oil company, Petrobras, in the form of payments and luxury real estate.

Supporters of Lulla confronted police officers during a protest in front of the former president's home on Friday.

Rousseff is already facing dismal approval ratings and impeachment proceedings over her use of funds from state banks to cover budget gaps. Beyond that, an array of politicians, including several from her governing Workers' Party, are in jail or on trial for corruption at the national oil company, Petrobras. For years, prosecutors say, hundreds of millions of dollars were siphoned from the company and channeled into political campaigns.

Now, with the deepening inquiry into Lulla, her most powerful supporter is facing doubts about his own legitimacy and political future.

Both Rousseff and Lulla are on the defensive over reports that a senator from their own party is negotiating a plea deal in which he is claiming they tried to undermine the graft investigation. Both the president and the former president deny doing so.

According to commentators, the development brings the graft investigation closer to his protege Rousseff, who is already facing impeachment for allegedly breaking budget rules, hurting her efforts to put the recession-hit economy back on track.

Rousseff, his successor, had repeatedly denied knowledge about any corruption, however, her government had been severely rattled by the scandal. Her justice minister, Jose Eduardo Cardozo, submitted his resignation on Monday, and on Wednesday, the Supreme Court voted to hear related corruption allegations against lower house speaker Eduardo Cunha.

"Brazil's perfect storm has reached its climax, and the likelihood of a sudden change in government, either through judicial or legislative means, has skyrocketed," said Jimena Blanco, head of Latin America analysis for Verisk Maplecroft, a risk consultancy, The Daily Telegraph reported.

"With the involvement of her political mentor, it is well nigh impossible for Rousseff to continue claiming that as head of the Petrobras board she was unaware of the overpricing and bribery scheme involving the company, construction firms and senior politicians."