Cops did not act while I was beaten: JNU's Kanhaiya Kumar

Jawaharlal Nehru University (JNU) Students' Union president Kanhaiya Kumar, who is in police custody in connection with the sedition case, has claimed that he was beaten in Patiala House Court in the presence of police and they did nothing. 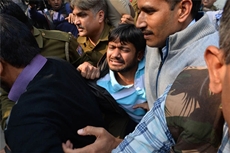 Three out of the four reports submitted to Supreme Court over the repeated violence at Patiala House Court, last week had said JNUSU president Kumar was not assaulted inside the court room but outside it, on 17 February.

Kanhaiya Kumar, however, in a video accessed by CNN-IBN, told the SC team that even after identifying the people who attacked him in the court, the police did not arrest them.

Describing the incident, Kanhaiya said, "I was surrounded by the media at the gate and then the police took me inside the courtroom, where the mob wearing clothes of lawyers attacked me. Some people who were beating me called other people shouting he's arrived. It looked like they were waiting for me. I was almost disrobed while being taken inside the court."

"Some police who were accompanying me in the court were also attacked. When I pointed at the man who attacked me, the police asked him to show his identity card, but he asked them 'who are you?' and then left from there. He could have been easily caught, but the police did nothing."

In a video, Kanhaiya is also seen saying, "I am being called anti-national. Certain section of media is doing my trail."

The Delhi Police on Friday interrogated Kanhaiya Kumar, Umar Khalid and Anirban Bhattacharya together for the first time at a south Delhi police station.

The Supreme Court has sought response from the Centre and Delhi Police on a plea seeking a Special Investigation Team (SIT) probe and initiation of contempt action against three lawyers who were allegedly caught on camera 'bragging and boasting' that they had beaten up Kanhaiya Kumar and others, including journalists, in the court complex.

Meanwhile, a security guard at JNU campus and a policeman, said to be eyewitnesses who have also recorded their statements in the sedition case, have been purportedly seen in a sting video saying that JNUSU president Kanhaiya Kumar did not raise any slogan.

Earlier, a similar sting operation was conducted on two of the three lawyers who allegedly assaulted journalists, JNU students and teachers at Patiala House Court, and were arrested earlier this week.

Meanwhile, one more Jawaharlal Nehru University (JNU) student, who has been accused of sedition, is under probe over the controversial event of 9 February where anti-India slogans were raised, said a NDTV report. The student, Ashutosh, is among the six students who were wanted by the police in relation to the the events that unfolded on JNU campus earlier this month. After being missing since 12 February, five of them surfaced on campus on 21 February.

The Delhi Police had accused 19 JNU students of displaying anti-national slogans, out of which 16 are alumni of the university, some of whom are pursuing higher education in institutions abroad, according to a DNA report. The list also includes names of those who now teach in several universities across India.

The reports adds that the Delhi Police's intelligence unit prepared the list a week after the protests erupted, but after it was revealed last week that the video showing students shouting anti-national slogans was doctored, they found themselves in an embarrassing situation.