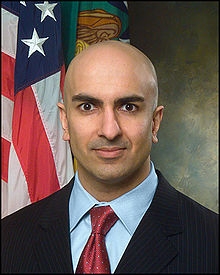 The US Federal Reserve's newest policymaker Neel Tushar Kashkari, a former point man for the government's bailout of the financial industry, on Tuesday called on lawmakers to take radical action to rein in banks and protect taxpayers.

In his first speech as head of the Minneapolis Fed, Indian-origin Kashkari, a Goldman Sachs executive before he worked at the US Treasury, urged Congress to consider "bold, transformational" rules including the breaking up of the nation's largest banks to avoid bailouts.

Kashkari indicated that his work at Treasury, where he managed a key part of the banking and auto industry bailouts during the financial crisis of 2007-2009, helped inform his current view.

A set of regulations introduced since the crisis, known as Dodd-Frank, did not go far enough, he said in prepared remarks that straddled the line between the Fed's policymaking remit and political advocacy.

"Now is the right time for Congress to consider going further than Dodd-Frank with bold, transformational solutions to solve this problem once and for all," Kashkari said, arguing that the biggest banks are still too big to fail and continue to pose a significant, ongoing risk to the US economy.

He urged lawmakers to consider breaking up large banks into "smaller, less connected, less important entities" and took a swipe at existing rules for winding down failing banks should they run into difficulty amid a weak global economy.

"I am far more sceptical that these tools will be useful," Kashkari said, adding that "we won't see the next crisis coming".

He said Congress should consider compelling banks to hold so much capital that they "virtually can't fail", in effect treating them like public utilities.

Speaking after his address, Kashkari said global economic and financial developments would be an "important" input when the Federal Reserve next meets on 15-16 March.

He stuck closely to the Fed's January statement, saying he sees moderate growth and a gradual increase in interest rates. He declined to specify how many rate hikes there might be this year.

Kashkari added he does not expect negative rates will be needed in the United States but it was something the central bank could use if deemed necessary.

Kashkari took the helm of the Fed's smallest regional bank in January, two weeks after the Fed raised its benchmark interest rate for the first time in a decade.

He does not have a vote on the Fed's rate-setting committee until 2017 under its rotation system, but participates in deliberations.