In a strange case of a high court challenging an apex court order, Madras High Court judge CS Karnan on Monday stayed a Supreme Court order on his transfer to the Calcutta High Court. 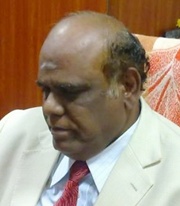 The Supreme Court had ordered the transfer of some high court judges, including Justice Karnan.

Justice Karnan also "directed" the Chief Justice of India to submit his written statement through his subordinates in the Madras High Court by 29 April and stayed his transfer order till such time.

He said the 12 February transfer order goes against the judgement of the apex court and stayed it.

Speaking to the media, Justice Karnan said the apex court has no power to interfere in his domain.

Justice Karnan also declared that he will order the city police to register an FIR against the two judges of the Supreme Court division bench that restrained him from undertaking any judicial work today morning under the provision SC/ST (Prevention of Atrocities) Act.

A division bench of Justices JS Khehar and R Banumathi had directed the chief justice of Madras High Court not to allocate any judicial work to Justice Karnan after he was served with the transfer order issued by the Chief Justice of India dated 12 February.

The judge also told reporters that it is only the allocation of judicial work to him that has been stopped and his judicial powers are still with him. Using this, he would direct the police to register the FIR, he added.

Alleging casteism in the judiciary and claiming that he was a victim as he is a Dalit, the judge said if his birthright is cancelled, he would "migrate" to a country where there is no such discrimination. He also called all judges to the Parliament for a debate on the issue.

Asked whether the serious charges he raised could become libellous and even contempt of court, Justice Karnan said he would pass a judicial order directing the courts against initiating contempt proceedings against the media for publishing these.