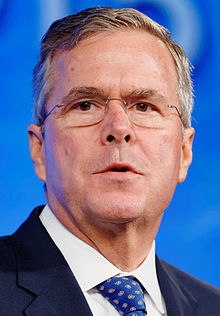 Former US president George W Bush returned to the campaign trail on Monday for the first time after demitting office in 2009 to stump for his brother Jeb, whose bid for the White House has so far failed to take off seriously.

The elder Bush was funny and self-deprecating, as most people remember him; he was also witheringly scornful of Donald Trump, without naming him, which was new.

And he invoked India, whose ostracism from the comity of nuclear powers he ended with a path-breaking agreement with the Manmohan Singh in 2008, but in a completely different, home grown, context.

''Thank goodness our country welcomed her parents from India when they immigrated here in 1969,'' he said at a South Carolina rally about Nikki Haley, the state's Indian-descent governor.

He met Haley earlier in the day to, as every commentator agreed, seek the endorsement of a governor who is polling 80 per cent in popularity and is on every Republican candidate's list as vice-presidential candidate.

On Monday night, George W was seen largely as someone looking out for his younger brother, keenly aware of his troubled campaign and determined to deal with it.

''These are tough times and I know that Americans are angry, but we do not need someone in the Oval Office who mirrors and inflames our anger and our frustrations,'' the former president said at a rally in South Carolina, ahead of the Republican primary in that state on Saturday.

After leaving office, the former president has deliberately kept out of politics - perhaps because of a presidency that involved an unprovoked war on Iraq and is still judged harshly by most - but made an exception for his brother.

The Washington Post said, citing friends of the former president, he and his father, George H W Bush, the 41st US president, have both been ''bewildered'' by the rise of Trump, the Republican front-runner.

Trump has been trashing Jeb Bush and his family - father, brother and mother - for a while now.

The turnout at the rally, experts noted, was larger than anything Jeb Bush, running to be the third Bush in the White House, has attracted on the campaign trail so far.

The candidate also delivered, as was widely acknowledged, his strongest speech yet - possibly because of the presence of his brother, with former first lady Laura Bush on the stage.

Jeb Bush, a two-term Florida governor, needs to finish in the top three to remain in the race with a credible chance. He is polling fourth currently in the RealClearPolitics average of polls.

But as the best-funded candidate, his war chest is large enough to last a while, though pressure will start mouthing on him to leave the race if he performs as badly in South Carolina as in Iowa and New Hampshire.

The former president is a controversial figure even among Republicans but remains popular among military personnel and their families, and South Carolina has eight military bases.

The former president opened with familiarly self-deprecating remarks - he said he has written two books since retiring, surprising those who thought he couldn't read, let alone write.