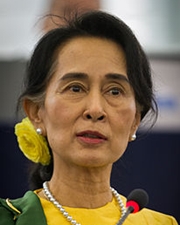 Aung San Suu Kyi today ushered in democracy into Myanmar, after a quarter century of struggle, but her assumption of office was muted with her lackluster entry into the country's parliament through a small door to sit expressionless at the front corner.

Except for the light orange light that blanketed Myanmar's lower house, the colour worn by Suu Kyi's National League for Democracy (NLD) party members, there was nothing to celebrate her party's win in parliament elections after decades of military rule.

With the election of speaker over, Aung San Suu Kyi is set to form a government and push through legislation in the next few months to fulfil her vision for the historically oppressive and autocratic country.

Suu Kyi, who won the 1990 polls with an absolute majority was forced to stand down by a junta that annulled the elections and 'the Lady' was put under house arrest in her family's villa by Yangon's Inya lake, together with many of her allies.

On Monday, with jasmine flowers in her hair and the party's peacock pattern on her longyi dress, Aung San Suu Kyi watched quietly as her choice of speaker and deputy speaker were installed.

But in her return to power after the November election win, she had opted to remain lie low and had warned supporters to be humble and remain wary of the military's tendency to intervene when it feels threatened.

Party spokesman U Win Htein, who spent years in prison himself, however was elated: ''We have been struggling for democracy since 1988,'' he said. ''We have suffered very much but now we see the results and the fruits of our suffering. It is a beautiful beginning,'' he said.

Win Htein said of the 390 NLD lawmakers elected to both houses of parliament, 110 are former political prisoners.

Their jail terms often spanned over two decades. Many were released only a few years ago, when power was handed over to a semi-civilian reformist government backed by the military and led by the president, Thein Sein.

Those reforms led to the November election.

In parliament on Monday, officials from the military – which is granted a quarter of seats in accordance to the junta-drafted constitution – were seated in light green on the right side of parliament. While most seats were taken by the NLD, also present were representatives from ethnic parties who had won constituencies: men and women wearing hats and colourful jackets from the northern states of Kachin and Shan, or the simple Burmese longyi skirt in different patterns.

Aung San Suu Kyi will have to share power with the military, which retains three key ministers; a quarter of seats in parliament and a veto on constitutional changes. She is also barred from taking the country's most powerful position but her overwhelming majority in both houses of parliament allows her to handpick the president.