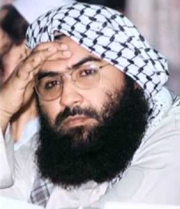 Pakistan has reportedly detained Maulana Masood Azhar, leader of Jaish-e-Mohammed, the terror group blamed by India for the deadly attack on the Pathankot Air Force base last week, in which seven military personnel were killed.

Azhar and four of his top aides have been detained in Islamabad, local media said. Earlier, a statement from the office of Pakistani Prime Minister Nawaz Sharif said, "Several individuals belonging to Jaish-e-Mohammed have been apprehended. The offices of the organisation are also being traced and sealed."

India had strongly suggested that without action by Pakistan against those responsible for the attacks, it will not go ahead with foreign secretary talks between the two countries which had tentatively been scheduled for Friday in Islamabad.

Prime Minister Narendra Modi had over the phone last week asked Pakistani premier Nawaz Sharif for prompt and decisive action on the basis of specific evidence provided by India. Sharif then set up a committee of his top intelligence, army and government officers to investigate the attacks.

Years ago, Pakistan had refused to hand over Azhar to India after he was named as the prime suspect in the 2001 attack on Parliament in which nine Indians including security guards were shot dead.

The portly cleric has remained mostly confined to a compound in his home city of Bhawalpur in Pakistan's Punjab province for years, but Indian intelligence officials pointed out renewed activity by him in 2014, when he addressed a large public rally via phone.

Azhar was arrested in Kashmir in 1994 while travelling on a forged Portuguese passport. India freed him and two other jailed Pakistani terrorists in 1999 in return for 155 passengers held hostage in an Indian Airlines aircraft that was hijacked to Kandahar in Southern Afghanistan.

One of the other freed militants was British-born Omar Sheikh, a close associate of Azhar who was later convicted in the 2002 abduction and murder of Wall Street Journal reporter Daniel Pearl.

After his release, Azhar set up the Jaish to fight Indian forces in Kashmir.

Pakistan has said it is considering sending investigators to India to get more information on the Pathankot attack. The Indian government has not yet reacted on whether this will be permitted.

Islamabad has said that some evidence submitted by India does not check out - it has reportedly conveyed that the phone numbers called by the terrorists from Pathankot are not registered in Pakistan, as claimed by Delhi.

Talks between the foreign secretaries are likely to be delayed, said a government sources. A decision could be taken tonight when Foreign Secretary Jaishankar returns to Delhi from a visit to Sri Lanka. He is expected to meet with Foreign Minister Sushma Swaraj and Prime Minister Modi.

Army Chief General Dalbir Singh today said that the Army will "carry out any task" it is assigned, in reaction to Defence Minister Manohar Parrikar's strong comments, made yesterday, that "those who harmed us will also feel the pain".