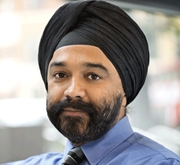 Indian-origin cancer research expert Harpal Singh Kumar, the chief executive officer of Cancer Research UK (CRUK), has been honoured with a knighthood by Queen Elizabeth II for his influential work on prevention and treatment of the disease.

The citation accompanying his knighthood said that Kumar "has been hugely influential in promoting research into the prevention, early diagnosis and treatment of cancer, and cancer care. CRUK's income and research spend are at an all-time high".

The citation added, "Under his leadership, CRUK has been instrumental in pushing the government to take further measures to reduce smoking and to ban sun-beds for under-18s. He also chaired the Independent Cancer Taskforce and authored the NHS cancer strategy, 'Achieving World Class Cancer Outcomes: A Strategy for England 2015-20', published in July 2015.

"He has been instrumental in setting up the Francis Crick Institute as a world-leading centre of biomedical research and innovation."

Refugee parents
Harpal Singh Kumar was born in India in 1965. His parents were both refugees from Pakistan. During Partition, they fled to India, and later moved to Britain

In 1997, he founded Nexan Group, a venture-capital-backed medical devices company. In 2002, he joined Cancer Research Technology Limited as a chief executive.

He became chief operating officer of Cancer Research, UK in 2004. He was promoted to chief executive officer in April 2007.

He has won the Mobil Prize, Metal Box Prize and Hughes Prize.