Republican presidential candidate Donald Trump on Tuesday defended his proposal to ban Muslims from entering the United States, comparing his plan to the World War II detainment of Japanese-Americans and others while dismissing growing outrage from around the world. 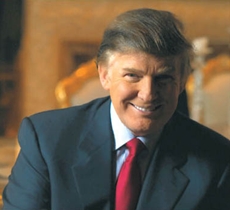 The White House called on Republicans to say they would not support Trump, currently the party's front-runner for the November 2016 election. US Homeland Security Secretary Jeh Johnson said his comments could undermine US security.

The prime ministers of France and the United Kingdom, Canada's foreign minister, the United Nations and Muslims in Asian countries all denounced the real-estate mogul's comments.

But Trump said his ideas were no worse than those of then-President Franklin D Roosevelt, who oversaw the internment of more than 110,000 people in US government camps after Japanese forces bombed Pearl Harbor on 7 December 1941.

"What I'm doing is no different than FDR," Trump said on ABC's "Good Morning America" programme.

"We have no choice but to do this," he said. "We have people that want to blow up our buildings, our cities. We have to figure out what's going on."

Trump said on ABC's "World News Tonight" the ban would be "short term". He said the ban could be lifted "very quickly if our country could get its act together."

Trump also pressed his case in fractious appearances on MSNBC and CNN.

On Monday, he called for blocking Muslims, including would-be immigrants, students, tourists and other visitors, from entering the country following last week's California shooting spree by two Muslims who, authorities said, were radicalised.

It was the most dramatic response by a presidential candidate following the San Bernardino, California, rampage, even as other Republicans have called for a suspension of President Barack Obama's plan to allow in 10,000 refugees from Syria.

Homeland Security Secretary Johnson said Trump's proposal could thwart US efforts to connect with the Muslim community, and the Pentagon issued a similar warning. Secretary of State John Kerry said Trump's ideas were not constructive.

A Trump campaign spokeswoman, asked for comment on US officials' reactions, did not address their criticism.

White House spokesman Josh Earnest said Trump's comments disqualify him from being president and said other Republican candidates should disavow him "right now".

Trump leads the Republican pack seeking the White House in 2016 with 35 per cent of support in a recent Reuters/Ipsos poll. Nearly all of Trump's rivals criticised his proposal on Monday.

Republican National Committee Chairman Reince Priebus told the Washington Examiner political news website that the United States must combat terrorism "but not at the expense of our American values".

But, other Republicans warned that if Trump is the party's choice for the November 2016 election, his stance could hurt in a matchup with Democratic front-runner Hillary Clinton.

"All this helps his buddy Hillary Clinton, for sure," presidential hopeful and former Florida Governor Jeb Bush told reporters in Manchester, New Hampshire. "I don't think Republicans are going to abide this language that guarantees that Hillary Clinton has a far better chance of winning."

Democrats, meanwhile, blamed Republicans for Trump's extreme language and warned it could help him with primary voters.