History has been made in Myanmar as Aung San Suu Kyi's pro-democracy opposition party was confirmed today as the winner of historic elections held five days earlier. 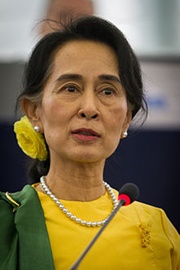 The latest official election results delivered an unassailable lead to the National League for Democracy in the parliamentary elections. Suu Kyi will be able to name the next president and form the new government.

Asked why so many people voted for her party, the Nobel laureate earlier told Radio Free Asia, ''Our hearts beat in the same note. We struggled together, and we had hopes together. We dreamed together for nearly 30 years. The NLD and the people are comrades-in-arms. I think that is the reason they supported us."

The electoral triumph was declared official exactly five years after the world's most famous political prisoner was released from house arrest for a third and final time.

Ecstatic street celebrations had begun within hours of polls closing on Sunday as it became clear that the NLD led by Suu Kyi was on course for a landslide.

But confirmation of the win has been frustratingly slow for opposition supporters as the national election commission only releases results in batches with several hours gap between announcements.

By Thursday evening, the latest constituencies announced their results that pushed Suu Kyi's party to the brink of the crucial ''super-majority'' number in the country. And just after midday on Friday, it swept past the 329 seats required in the two chambers to run the country.

Long a political favourite of Western leaders, Suu Kyi has received telephone calls of congratulations from the UK's David Cameron, Barack Obama of the US, and French President Francois Hollande, the NLD said.

It is 55 years since Burma's last democratically elected leader, the revered prime minister U Nu, won power at the ballot box. Just two years later, his army commander Ne Win overthrew him in a coup.

More than half a century later, the dominant military and its political proxies have admitted defeat, issuing strikingly magnanimous congratulations to the NLD for its election performance.

Their conciliatory messages appeared to end lingering fears that the military might overturn the result, as it did when the NLD won a previous election by a landslide in 1990.

On Thursday morning, US President Barack Obama called Thein Sein, the general-turned-president, to congratulate him on the handling of the elections.

The returns will continue to be announced in coming days and it was not clear whether there would be formal victory or concession speeches by winners and losers before that process ends.