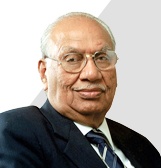 Brijmohan Lall Munjal, patriarch of Hero MotoCorp and doyen of the Indian two-wheeler industry, died on Sunday evening after a brief illness. He was 92.

Munjal passed away at a private hospital in South Delhi. He is survived by three sons and one daughter. His body will be cremated today.

Munjal had retired from playing an active role and become chairman emeritus of the over $4-billion group earlier this year, and remained on the board of the company as non-executive member.

The Hero Group, which officially came into existence in 1956, had started its activities in the early 1940s as a bicycle-maker run by four brothers.

Munjal was born in 1923 at Kamalia in present-day Pakistan. After India's independence, the Munjal brothers started a small business of manufacturing bicycle components in Ludhiana and went on to build one of the largest business groups in the country.

Munjal led the Hero Group to a number of firsts. Hero MotoCorp is the world's largest two-wheeler company now for the 14th year in a row. Another group firm, Hero Cycles has been the largest manufacturer of bicycles since 1986.

Munjal led the Hero group to form a joint venture with Japan's Honda in 1984, and the joint venture - Hero Honda, went on to become the world's single-largest motorcycle maker. The partnership ended in 2011.

Munjal was among the earliest Indian industrialists to effectively implement JIT (Just-in-Time) as well as backward integration and is acknowledged as the trend-setter in the area.

Since early days, he ran the organisation with a sharp focus on current asset management, which helped evolve vendor efficiency and zero-inventory management practices at Hero.

Beside Hero Group, Munjal held leadership positions in many national associations such as CII, SIAM, AICMA and PHD and had served as a member of the Regional Board of Reserve Bank of India. He was conferred with the Padma Bhushan in 2005 in recognition of his contribution in the field of trade and industry.

Munjal helped establish numerous medical, educational and infrastructure facilities. Amongst his notable contributions to Ludhiana are the Ludhiana Stock Exchange, the Ludhiana Aviation Club, Ludhiana Management Association and the Dayanand Medical College & Hospital, of which he was the Chairman Emeritus, after being its President for over three decades.