Facebook founder Mark Zuckerberg, who has been in China for the past several days took time off to show off his Mandarin-speaking skills. 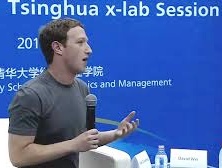 "I just gave my first ever speech in Chinese at Tsinghua University in Beijing," Zuckerberg wrote on his Facebook page on Saturday.

In his 22-minute speech, Zuckerberg discussed Facebook's beginnings and the importance of sticking with the job at hand when faced with hurdles, all the while managing to elicit smiles and, at times, laughter from the audience.

"This was also my first real speech in any language sharing how I started thinking about Facebook's mission, what has kept me going through challenging times and what our mission means now looking ahead for our community of 1.5 billion people," Zuckerberg wrote, later calling the speech a "pretty special" moment in his life.

Zuckerberg started learning Mandarin in 2010 as an annual challenge for himself, and had in recent years, also taken on similar challenges, including wearing a necktie every day in 2009 and only eating meat from animals he had personally slaughtered in 2011.

Dressed in his standard gray T-shirt and jeans, Zuckerberg spoke about why he had created Facebook and the mission behind his drive to continue running the company through challenging times.

He posted a video of the speech to students at Tsinghua University in Beijing, with English subtitles on Sunday, saying it was ''my first ever speech in Chinese.''

Zuckerberg surprised the public in October last year when he carried out a Q&A at Tsinghua entirely in Mandarin.

Zuckerberg also recently added a Chinese science fiction novel to his public reading list, and is a board member of the Tsinghua University's School of Economics and Management.

According to Zuckerberg, he learned the language to help communicate with his wife Priscilla's paternal grandmother, but commentators point out that his multilingual skills could also help in breaking into the closed Chinese market.