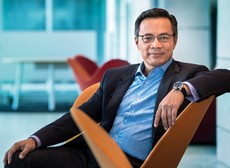 According to LafargeHolcim, departing Aebischer, who is leaving to pursue opportunities outside the Swiss-French company would be replaced by Ron Wiradhadiraksa.

Lafarge and Holcim completed their merger in July to form the world's largest maker of building materials (See: €41-bn Holcim-Lafarge merger gets conditional US, Canadian nod).

Wirahadiraksa had been CFO at Philips since 2010, assuming the role following a previous posting as a cost cutter within the company's Asian healthcare business.

The merger of Holcim and Lafarge was announced in 2014, creating a company with over $44 billion in annual sales. It was billed as an opportunity to cut costs and reduce debt as the company grappled with increasing energy prices, tougher competition and weaker demand that had hit the building materials sector since the 2008 economic crisis.

"This change is our CEO's decision and it received the full support of the board," said spokesman Peter Stopfer.

According to Philips' statement, Wirahadiraksa had resigned to take up a position at "a listed company in the industrial sector.''

Bhattacharya, an Indian national, was the top financial manager at Philips' lighting division, which is set to become a separate company. He was earlier CFO of Philips Healthcare division.