There seems to be no middle ground in opinions about Prime Minister Narendra Modi; either you love him or you hate him – and the literate classes mostly seem to hate him. 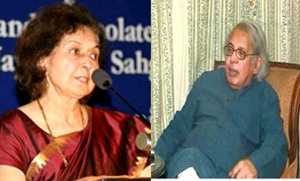 After author Nayantara Sahgal returned her Sahitya Academy Award on Tuesday in protest against what she called the "vicious assault" on India's diversity and right to dissent, poet Ashok Vajpeyi today also given up the prestigious literary honour in the same cause.

The immediate trigger for the renunciations was the lynching of a Mohammed Akhlaq, a Muslim man, in Uttar Pradesh's Dadri village on rumours that he had eaten beef, and the subsequent communally insensitive statements of senior leaders of the ruling BJP, including a senior minister.

"It is high time that writers take a stand," Vajpeyi, a former chairperson of the Lalit Kala Akademi, India's premier arts institute, said.

Vajpeyi (74) is a noted Hindi poet, critic, writer and administrator, who is also a former civil servant.

Nayantara Sahgal (88) – who incidentally is the niece of India's first Prime Minister Jawaharlal Nehru – had received the award for her English novel People Like Us.

She recorded her protest against the alleged stifling of freedom of expression by the government in a scathing statement titled The Unmaking of India.

In it, she refers to the recent Dadri killing as well as the murder of noted Kannada writer and rationalist M M Kalburgi, and Maharashtrian anti-superstition campaigners Narendra Dabholkar and Govind Pansare, saying, ''Others have been warned they are next in line  the right to dissent is being stifled.''

Ashok Vajpeyi said it was rare for a senior English writer like Nayantara Sahgal to take such a strong stand, and it needed support from the writing community.

"The Prime Minister (Narendra Modi) keeps quiet. He is an eloquent Prime Minister who addresses lakhs of people, but here writers are being murdered, innocent people are being killed, and his ministers are making objectionable statements...Why doesn't he shut them up?" he told NDTV.

Vajpeyi also expressed disappointment at the silence of the Sahitya Akademi, the national academy of letters comprising writers, and said it "failed to rise to the occasion and respect its autonomy".

"He has uttered no word of condemnation at all at these incidents. The whole country wishes the Prime Minister to make a statement because the situation is getting more and more serious," Sahgal said.

"Under Modi we are going backwards, regressing, narrowing down Hindutva ... there is rising intolerance and lots of Indians are living in fear," she commented.