Board of Control for Cricket in India (BCCI) president Jagmohan Dalmiya, died at a hospital in Kolkata on Sunday at around 9 pm. He was aged 75. 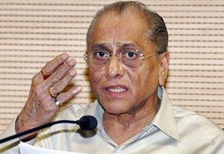 He is survived by wife, daughter Vaishali and son Abhishek.

Dalmiya was hospitalised on Thursday evening after he complained of chest pain. An angioplasty was performed and he remained 'stable' for the next three days, before his condition worsened, hospital sources said.

He was involved with the BCCI for more than three decades, starting his journey as its treasurer in 1983 before becoming its secretary.

He became president of the International Cricket Council in 1997 and held the post till 2000. He became BCCI president in 2001 and continued till 2004. He was instrumental in organising the World Cups in 1987 and 1996.

West Bengal chief minister Mamata Banerjee, who visited the hospital, said he would be given a state funeral.

The cricket boards of South Africa and Bangladesh were prompt to send their condolences. In 1991, the Dalmiya-led BCCI had welcomed South Africa back from cricketing oblivion after it ended apartheid; and many saw the late ICC president's hand in according Test status to Bangladesh in June 2000.

As a mark of respect to Dalmiya, Bangladesh cricketers and officials observed a minute's silence and wore black arm bands today before the start of the fourth day's play in matches of the 17th National Cricket League (NCL).

A Bangladesh Cricket Board delegation is expected for Dalmiya's funeral.

Dalmiya, typically of Indian sports administrators, had never played the game at any serious level, and owed his position to being politically well-connected.

But he will be remembered for ending the hegemony of White nations England and Australia over world cricket and making India the new cricketing powerhouse, in terms of clout if not on-field ability.