More reports on: Technology, Council for Scientific and Industrial Research

Dr Girish Sahni takes over as director general of CSIR 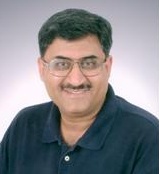 Dr Girish Sahni, who headed the CSIR-Institute of Microbial Technology (CSIR-IMTECH), Chandigarh, has assumed charge as director general of the Council of Scientific and Industrial Research (CSIR).

Sahni assumed charge as head of the country's top scientific and technological research organisation on 24 August.

As head of CSIR, he will also be ex-officio secretary of the Department of Scientific and Industrial Research (DSIR) of the ministry of science and technology.

Sahni, who specialises in protein engineering, molecular biology, and biotechnology, has contributed significantly in the area of protein cardiovascular drugs, especially 'clot busters' and their mode of action in the human body.

His team has also developed a novel life-saver thrombolytic drug (clot-specific streptokinase), India's first bio-therapeutic molecule which is not a biosimilar. This life-saver drug has been patented worldwide and licensed to a US Pharma company for which the commercial launch is expected in 2016.

Recently, the team led by him developed fourth-generation 'Anti-thrombotic' clot busters - the first of its kind in the world.

Born on 2 March 1956, Dr Sahni holds a PhD from Indian institute of Science (IISc), Bangaluru. His career included a stint each at University of California, Rockefeller University and Albert Einstein College of Medicine – all in the US.

Dr. Sahni is internationally recognised for his research contributions. He has been the author of several papers published in high impact refereed scientific journals and has a number of national and international patents to his credit. He is a fellow of the Indian National Science Academy (New Delhi), Indian Academy of Science (Bangalore), NASI (Allahabad), Association of Microbiologists of India and member of Guha Research Conference.