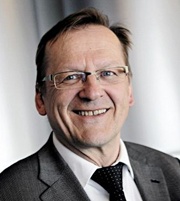 Matti Makkonen, the Finnish telecom mobile engineer who first proposed the idea of sending messages over mobile networks has passed away. Makkonen 63, was called the ''reluctant father of SMS.''

Though it was first suggested on 3 December 1984 at a Telecoms conference, Short Messaging Service, (SMS) it was only in 1992 that the first text message was sent.

While Makkonen is widely credited with the idea for the technology, he never failed to point out that the development was a joint effort and not his sole work.

In a text message interview to the BBC in 2012, one of a rare few, Makkonen said that he believed the service really gained acceptance when the Nokia 2010 handset popularised it in 1994 with its easy-to-write messaging.

He also told BBC that he believed texting in some form would be around "forever".

"The real launch of the service, as I see it, was when Nokia introduced the first phone that enabled easy writing of messages (Nokia 2010 in 1994)," he had said. He added he did not use "txt spk" himself, though he pointed out that texting could be thought of as having had an impact on the development of language.

Finnish telecoms group Finnet Association managing director Jarm Matilainen described Makkonen as a "grand old man of the mobile industry", adding it was "very sad, he was just going to retire and he should have had many years ahead."