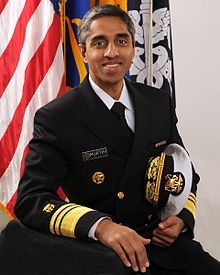 Vivek Murthy on Wednesday took charge as Surgeon General of the US, becoming the highest-ranking Indian-American in the Obama administration. At 37, Murthy is also the youngest-ever to take reins of the country's public health administration.

Vice President Joe Biden administered the oath of office for the top post of US Surgeon General to Murthy at a ceremonial ceremony attended by eminent Indian-Americans, who flew in to Fort Myer, Virginia.

''To have the opportunity to serve as Surgeon General is an extraordinary honour and a profound responsibility, and I want to thank President Obama for entrusting me with the stewardship of this office,'' Murthy said in his acceptance speech on the occasion.

Murthy took the oath on the holy Gita.

As the US Surgeon General, Murthy carries the rank of Vice-Admiral.

''He is eminently qualified for the job,'' Biden said on the occasion and described his family as an ''incredible'' family in particular his grandmother who was present on the occasion.

''I am who I am because of my grandmother's faith, my father's strength, my mother's love, my sister's support and my fiancee's unyielding belief in me. I am blessed to have all of them here with me today. I will always be grateful to them for the sacrifices they have made,'' he said, with his parents and family members seated in the audience.

"But for my grandfather's insistence that his son get an education - even if that meant going into debt - we might have never left that village to go out in the world and - as my grandfather also insisted - start fixing what needed fixing,'' he said.

''We were not supposed to have become Americans. My parents stopped in three other countries - including a brutal dictatorship - on their journey to get here. They saved up money and scrounged for information about job opportunities, always knowing that America was the destination,'' Murthy said.

In his first major policy speech, Murthy vowed to improve the public health of the country. ''Here's the thing: even as millions of Americans get covered through the Affordable Care Act, we still have much more to do,'' he said.

''Public health does not exist in a vacuum. It is intrinsically linked to education, employment, the environment and our economy. There is a whole world beyond hospital corridors and clinic waiting rooms where people are struggling with issues of transportation, housing and development,'' he said.

Murthy is starting his tenure with a listening tour that will take him across America. He said he wasn't interested in using his post "as a bully pulpit for gun control."

There are serious and pressing public health issues such as smoking or obesity, all of which he plans to do address. But though he's a physician by training, he argues that institutions outside of medicine often have the biggest impact on public health.

Murthy says he is aware of the fact that there is a world outside the clinic and the hospital bed that can better guide and help the individual to decide on changing their diet and improving their physical activity. This, he said, is the experience that any doctor or nurse who has cared for patients, would acknowledge.