Yechuri may be best bet to revive CPI-M's flagging fortunes

Sitaram Yechuri, the new chief of the Communist Party of India (Marxist), was an outstanding student, in contrast to most Indian politicians. The 62-year-old Politburo member has acquired the reputation of a leader with considerable skills in political negotiation, with friends across the political spectrum. 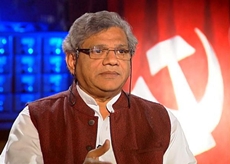 Yechury, who was elected as the CPI-M general secretary at the party's 21st Congress in Visakhapatnam on Sunday, is cast much in the mould of the late and highly-respected party leader Harkishan Singh Surjeet.

One of his first statements on taking over was that his party would soon merge with the Communist Party of India, ending a decades-old split to create a truly united Left Front (See: CPM's new chief Yechury vows merger with CPI)

He further honed his skills when the Left parties backed the first UPA government with 'outside support', even as it often putting pressure on the Congress-led regime on policy issues.

He had also played a critical role in the talks with the government on the Indo-US nuclear deal, which led to the withdrawal of Left support to the government because of his boss Karat's stubborn stand.

Since then, the CPI-M has been utterly sidelined under Karat's leadership It remains to be seen if Yechuri can help the party to once more become a force to reckon with – and perhaps even spearhead a credible 'third front', which is much needed as the Congress seems thoroughly emasculated at the moment.

Yechury, who joined the Students Federation of India (SFI) in 1974 and became a member of the party the very next year, was arrested a few months later during the Emergency.

He did his post-graduation from Jawaharlal Nehru University again with a first class, but could not complete his PhD degree due to his arrest during the Emergency, after having remained underground for some time organising resistance.

After his release, he was elected president of the JNU Students' Union thrice. In the SFI, he became the All-India Joint Secretary in 1978 and its president soon thereafter.

In 1985, Yechury was elected as a member of the Central Committee of the CPI-M and then to the Politburo in 1992. He has also headed the party's international department and was the editor of the party organ 'People's Democracy' for a long time.

With his radical views, he played a crucial role in convincing the leaders of the Maoist party in Nepal to join the political mainstream there, using his contacts of the student days.

Yechury was elected to Rajya Sabha in July 2005. His powerful speeches in the upper house on issues ranging from the plight of the peasantry and the working people and the government's economic and foreign policies to the growing threat of communalism, have won much acclaim.

He was also the erstwhile chairman of the parliamentary standing committee on transport, tourism and culture, which brought out several reports on crucial issues.

Yechury is married to a journalist and has a daughter and a son from his first marriage.