Perhaps for the first time in history, a US president has written a fairly laudatory piece about an Indian prime minister in a popular publication. 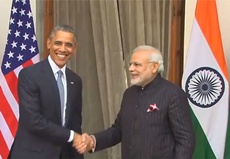 As Time magazine put Prime Minister Modi in its list of the 100 most influential people in the world, US President Barak Obama has written an accompanying piece titled 'India's reformer-in-chief'.

Clearly showing a warm personal relationship between the two leaders, Obama has described Modi's life story ''from poverty to prime minister'' as one that reflects the dynamism and potential of India's rise.

''Today, he's the leader of the world's largest democracy, and his life story from poverty to Prime Minister reflects the dynamism and potential of India's rise,'' Obama writes in Time's latest issue.

Of course, many Indians might differ from Obama's perception of Modi - economic reforms have not seriously taken off, but his pro-Hindu agenda certainly has. But the foreign perception is different, thanks to his continual global bridge-building.

''Like India, he transcends the ancient and the modern - a devotee of yoga who connects with Indian citizens on Twitter and imagines a 'digital India','' the US President wrote.

''We reflected on the teachings of King and Gandhi and how the diversity of backgrounds and faiths in our countries is a strength that we have to protect. Prime Minister Modi recognises that more than 1 billion Indians living and succeeding together can be an inspiring model for the world,'' Obama said.

Apart from Modi, ICICI chief Chanda Kochchar and Vikram Patel, co-founder of the NGO Sangath and the Centre for Global Mental Health at the London School of Hygiene and Tropical Medicine, have also been named to the annual list of the most influential people in the world ''who are shaping the future.''

Time's political columnist Joe Klein said on Obama that the American President has made some of the most serious history of his presidency, producing a framework for a nuclear non-proliferation deal with Iran and starting the path to normalising relations with Cuba.

''A difficult world still loomed, and his presidency was far from perfect. But Barack Obama has proved that even after a lacerating defeat, the President of the United States is always, potentially, the most influential person in the world,'' Klein said.