Former Prime Minister Atal Bihari Vajpayee, who led the first BJP-led National Democratic Alliance government in India, was conferred with Bharat Ratna, the country's highest civilian award at a special function at his residence on Friday. 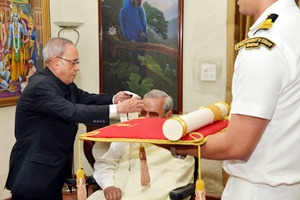 President Pranab Mukherjee drove to Vajpayee's residence at Krishna Menon Marg in Lutyens' Delhi to confer the honour on Vajpayee who is ailing and has been out of public life for about eight years.

The citation read out at the occasion described Vajpayee as a statesman known for a subtle sharpness that engages, attracts and brings many together. In his six decade long political career, five of which in Parliament, Vajpayee was elected to Lok Sabha 10 times and twice to Rajya Sabha.

Prime Minister from 1998 to 2004, Vajpayee has faded from public life due to age-related illness. The event was kept out of media glare.

Considered the moderate face of BJP, he has been credited with taking bold initiatives for forging good ties with Pakistan which included historic bus journey to Lahore in 1999 when he signed the landmark Lahore Declaration with Prime Minister Nawaz Sharif with both sides pledging to push for peace and security.

The citation read that Vajpayee represents a moderating influence against polemic by encouraging dialogue. "He is quietly a persuasive voice, a quality as much valued in politics and grand negotiations, as in our everyday lives.

"A great orator and poet-leader, he moves not just his followers, but also an entire nation to walk with him, and work with him," it read.

It said Vajpayee held a broad-based coalition together, setting the norms for an inclusive political landscape to govern India for years to come.