Apple's Cook to give almost entire fortune to charity 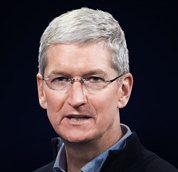 Apple Inc's chief executive Tim Cook is planning to give away all of his near $800 million fortune to charity before he dies - but before that, he will make sure that his 10-year-old nephew's education is taken care of.

Cook did not say which charities he will be giving his money to. But he has spoken publicly about his support of human rights and equality and the need to stop HIV/AIDS and climate change.

In 2012, he donated $25 million to Stanford University for a new children's hospital and $50 to Project Red.

Commenting on his decision, Cook said, "You want to be the pebble in the pond that creates the ripples for change."

Fortune estimated Cook's net worth, based on his holdings of Apple stock, at about $120 million. He also holds restricted stock worth $665 million, if it were to be fully vested.

The announcement came after billionaire financier Warren Buffett urged the rich to give away at least half their worth in their lifetimes through the "Giving Pledge," whose website lists the likes of Microsoft's Bill Gates, Mark Zuckerberg of Facebook and Oracle's Larry Ellison.

Cook, who is not listed on the website, is known as an intensely private person who shuns the spotlight, especially on philanthropy.

Sexuality a 'yawner'
In a surprisingly frank interview, he also described his sexuality as a ''yawner''.

He said he would develop a systematic approach to philanthropy, rather than just writing cheques.

Cook has previously spoken of his affection for his nephew. In a speech last year, he said, ''I have a nephew that I dearly love that's 10, and when I look at him, and when I think of leaving a world that's not as good as when I entered it, there's no bigger sin than that.''

Cook also spoke about his decision to come out as gay last year - making him by far the most influential gay business executive as head of the world's most valuable company.

He said he made the decision to come out ''quite some time ago'' and that his announcement was viewed internally at Apple - where most people already knew he was gay - as a ''yawner''.

However, Cook said making his sexuality public knowledge was difficult because he is a very private and guarded about his personal life. ''To be honest, if I would not have come to the conclusion that it would likely help other people, I would have never done it,'' he said.

In the interview, Cook also took a strong line on investors trying to make a quick buck out of Apple's rising share price. ''The kind of investors we seek are long term, because that's how we make our decisions,'' he said. ''If you're a short-term investor, obviously you've got the right to buy the stock and trade it the way you want. It's your decision. But I want everybody to know that's not how we run the company.''