Singaporeans wept and world leaders paid tribute Monday as the city-state mourned the death of its Lee Kuan Yew, considered the architect who transformed the country into a financial powerhouse. 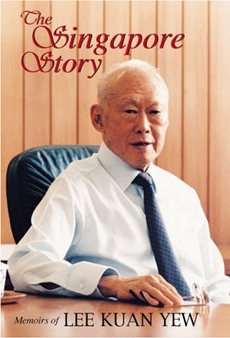 An increasingly frail Lee, 91, was hospitalised in early February with severe pneumonia. The government announced that Lee, 91, ''passed away peacefully'' several hours before dawn at Singapore General Hospital.

State television broke away from regular programming with a hagiographic tribute to Lee's life and achievements. In a live broadcast, one of its reporters called Lee's death the ''awful and dreaded'' news.

Lee commanded immense respect, and sometimes fear, from Singaporeans, who this year will celebrate the country's 50th anniversary of independence. Lee led multiracial Singapore with an iron grip for more than three decades until 1990, and is credited with transforming the resource-poor island into a wealthy bustling financial hub with low crime and almost zero corruption.

At the same time, he was also known to be a dictator who clamped down with an iron hand on any sign of dissent or deviation from his policies.

Speaking in Malay, Mandarin and English, the Prime Minister Goh Chok Tong said Lee built a nation and gave Singaporeans a proud national identity. ''We won't see another man like him. To many Singaporeans, and indeed others too, Lee Kuan Yew was Singapore,'' he said.

Neighboring Malaysia, with which Singapore has occasionally testy relations, said Lee's achievements were great and his legacy assured.

''Malaysia is committed to the future of our relationship with Singapore,'' said Prime Minister Hajib Razak of Malaysia.

In Beijing, foreign ministry spokesman Hong Lei described Lee as ''an Asian politician with unique influence as well as a strategist imbued with eastern values and an international perspective.''

The Singapore government has declared seven days of national mourning and flags will fly at half-mast on state buildings. But no national holiday has been declared and daily life in this pragmatically commercial city of vaulting glass towers and broad immaculate streets continues to bustle.

A private wake for the Lee family will take place today and on Tuesday at Sri Temasek, the Prime Minister's official residence in the lush tropical grounds of the Istana government complex. After that, Lee will lie in state at parliament until a state funeral on Sunday.

The government also set up condolence boards at Parliament House and Istana and a website called Remembering Lee Kuan Yew where people can leave messages.

After stepping down as Prime Minister, Lee remained part of the cabinet and an influential figure in Singapore and Asia.