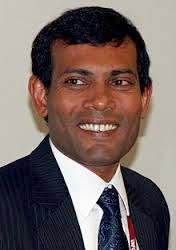 India on Saturday voiced ''deep concern'' over the developments in the Maldives, a day after former president Mohamed Nasheed was sentenced to 13-year imprisonment by a criminal court of that country under anti-terror laws.

''We are deeply concerned over the developments in the Maldives. We are monitoring the situation there'', said a spokesman of the external affairs ministry.

In a court hearing late on Friday night, Nasheed, the country's first democratically elected leader who was arrested on 22 February over the detention of a judge in 2012, was charged under the Anti-Terrorism Act 1990.

''The Anti-Terrorism Act, inter alia, classifies an act of terrorism to include kidnapping, holding as hostage or apprehending someone against their will or attempts to kidnap, hold hostage or apprehend someone without their will, for the extrajudicial enforced disappearance of the sitting Chief Judge of the Criminal Court,'' the sources said, quoting the court judgement.

The 47-year-old Nasheed resigned as the Maldives' President in February 2012 after a mutiny by police and troops that followed weeks of protests over the arrest of judge Abdullah Mohamed on corruption allegations.

Nasheed has a constitutional right of appeal to the High Court of Maldives.

The prosecutor general's case against Nasheed was based on the investigation report of the Human Rights Commission of Maldives into the kidnapping of the Judge.

India had expressed concerned over the ''arrest and manhandling'' of Nasheed a few days ago and asked all those involved to resolve their differences within the constitutional framework.

Nasheed had taken shelter at the Indian High Commission in Male to avoid arrest in connection with the same case in February 2013.

He claimed that he was forced to quit in February, 2012 after soldiers and police mutinied and overran his Maldivian Democratic Party's headquarters in the capital Male.

However his successor, Mohamed Waheed, who had been serving as vice-president, had said Nasheed left of his own accord.