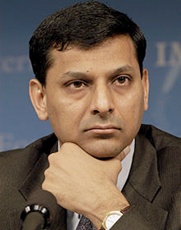 Despite apparent cooperation, Reserve Bank of India governor Raghuram Rajan on Friday gave further indication that he is not a great admirer of the Modi government, using Hitler to make the point that a strong government may not always move in the right direction.

Giving a lecture on 'Democracy, inclusion and prosperity' in Goa, Rajan focused on a middle path between unchecked powers for the administration and a ''complete policy paralysis''.

Rajan said India has strong institutions like the judiciary, the opposition, the media, and NGOs, but the government and its regulatory capabilities need to be strengthened, and regulation in the country needs more specialists with domain knowledge and experience.

''The country would have to resist the ''temptation to implant layers and layers of checks and balances even before the capacity has taken root,'' he said.

''We must choose a happy medium between giving the administration unchecked power and creating complete paralysis, recognising that our task is different from the one that confronted the West when it developed, or even the task faced by other Asian economies,'' Rajan pointed out.

''Hitler provided Germany with an extremely effective administration - the trains ran on time, as did the trains during our own Emergency in 1975-77, he said, taking a dig at slain Prime Minister Indira Gandhi and perhaps even Italy's Mussolini, who was also praised for making trains run on time.

He stressed that a strong government should be led by those who have expertise, motivation and integrity and can provide the needed public goods.

''Hitler's was a strong government, but he took Germany efficiently and determinedly on a path to ruin, overriding the rule of law and dispensing with elections.

''It is not sufficient that the trains run on time, they have to go in the right direction at the desired time,'' he said.

He added that economic inclusion should mean easing access to quality education, nutrition, healthcare, finance and markets to all citizens for ensuring sustainable growth.

He suggested that major reforms are needed in many areas of government ''For instance, well-trained economists are at a premium throughout the government, and there are far too few Indian Economic Service officers to go with.

''We may have a long way to go  (as far as) the capacity of the government, by this I mean regulators like RBI also, to deliver governance and public services,'' he said.

With his speech no doubt noted by the government, it seems unlikely that Rajan will get an extension of his tenure as RBI governor, say media commentators.