Nobel laureate for economics Amartya Sen has withdrawn his candidature for a second term as Nalanda University Chancellor despite being the unanimous choice of the university's board, saying the Narendra Modi government does not want him to continue in the position. 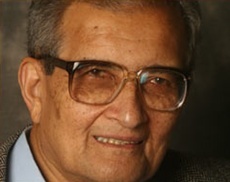 Sen has criticised Prime Minister Modi in the past, saying he would not like the former Gujarat Chief Minister to become PM. But later, he said Modi had brought a new enthusiasm to the country that could be productive.

In a letter to the governing board of the university, Sen blamed the government for deliberately delaying approval of his second term by refusing its sanction the recommendation of his name by President Pranab Mukherjee.

"Non-action (by government) is a time-wasting way of reversing a board decision, when the government has, in principle, the power to act or not act ... it is hard for me not to conclude that the government wants me to cease being the chancellor of Nalanda University after July, and technically, it has the power to do so.

"This delay, as well as the uncertainty involved, is leading, in effect, to a decisional gap, which is not helpful to Nalanda University's governance and its academic progress.

"I have, therefore, decided that in the best interest of Nalanda University, I should exclude myself from being considered for continuing as chancellor beyond this July, despite the unanimous recommendation and urging of the governing board for me to continue," he wrote.

It is clear that Mukherjee has been unable to provide his assent to the board's unanimous choice in the absence of government's approval, he said.

The board had made its unanimous recommendation of a second term for Sen in its last meeting on 13 January.

Sen, who has also been awarded the Bharat Ratna, rued that academic governance in India remains "so deeply vulnerable to the opinions of the ruling government".

"Even though the Nalanda University Act, passed by Parliament, did not, I believe, envisage political interference in academic matters, it is formally the case - given the legal provisions (some of them surviving from colonial days) - that the government can turn an academic issue into a matter of political dispensation if it feels unrestrained about interfering," he said.

In his letter, the noted economist has said the board's ''firm and enthusiastic'' decision was conveyed to the President, who is the Visitor of all Central Universities, in mid-January ''drawing his attention to the urgency of the matter'', but no response has been received yet.

The Nobel Laureate, who in 2013 has come out against then Gujarat Chief Minister and now Prime Minister Narendra Modi stating he did not want him to become PM, had recently remarked that although he disagreed with Modi on many issues, the Prime Minister had been able to give ''a sense of faith to people that things can happen''.

''I am also sad, at a more general level, that academic governance in India remains so deeply vulnerable to the opinions of the ruling government, when it chooses to make political use of the special provisions,'' he said.

''As you would also remember, there was considerable disquiet among Board members about the government's evident unwillingness to appreciate the international character of Nalanda University and to pay appropriate attention to the multi-country governing board of Nalanda. In particular, the governing board was kept completely in the dark about an attempted unilateral move by the government to rapidly reconstitute the entire board, and to do this in violation of some of parts of the Nalanda University Act,'' the letter added.

Sen had threatened to quit the university last year before the Lok Sabha election after the finance ministry raised queries on the financial management of the university's revival plan.

India's first university, the 800-year-old Nalanda, came back to life with the resurrected centre of learning opening its doors to the world on 1 September 2014. The new international knowledge destination with seven schools planned for post-graduate and doctorate students is expected to be back in its full glory by 2020.(See:  Nalanda University back to life after 800 years)http://www.domain-b.com/economy/general/20140901_opening.html