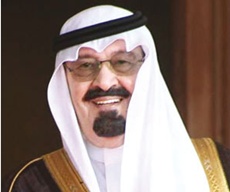 Saudi Arabia's ruler King Abdullah bin Abdulaziz died today after almost a decade on the throne of the world's largest oil exporter. He has been succeeded by Crown Prince Salman, the royal court said.

The late monarch's half-brother Moqren was named as the new Crown Prince, according to the statement.

"With great sadness and mourning His Royal Highness Crown Prince Salman bin Abdulaziz al-Saud, and all members of the family and the nation, express condolences for the Custodian of the Two Holy Mosques King Abdullah bin Abdulaziz al-Saud, who passed away at exactly 1:00 am (local time) this morning, Friday," an announcer said on state television, after a recitation from the Koran.

Abdullah will be buried later today following afternoon prayers, and citizens would be invited to pledge allegiance to the new monarch and crown prince at the royal palace, the statement said.

King Abdullah, believed to be around 90 years old, was hospitalised on 31 December for checks. The royal court announced two days later that he had pneumonia and was breathing with the aid of a tube.

Powerful figure
Abdullah came to the throne in 2005 but had been a powerful figure in the kingdom for a decade before that after King Fahd suffered a stroke in 1995.

In recent years, Abdullah's advanced age and poor health have raised concerns about the future leadership of the largest producer in the Organization of the Petroleum Exporting Countries.

Salman has been representing the king at most recent public events because of Abdullah's ailing health.

In March 2014, King Abdullah named another half-brother, Prince Moqren, as a second crown prince, in an unprecedented move aimed at smoothing succession hurdles.

Moqren, a former air force officer born in 1945, is the youngest son of King Abdul Aziz al-Saud, the founder of Saudi Arabia.

The throne has systematically passed from one of his sons to another, brothers and half-brothers.

But many of Abdul Aziz's sons are old or have died. Abdullah's former crown princes Sultan and Nayef died in 2011 and 2012 respectively.

Unstained by the profligacy tainting many of the Saudi rulers, Abdullah was hugely popular with his subjects, cherishing the traditional desert life of the Bedouin.

He pushed the kingdom's economic development and oversaw its accession to the World Trade Organization, while challenging conservatives with moves such as including women in the Shura Council, an advisory body.