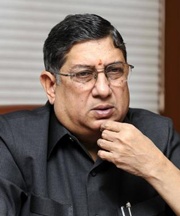 The Supreme Court today dealt a decisive blow to the hopes of ousted Board of Control for Cricket in India president N Srinivasan to get back into the driving seat of Indian cricket, ruling that neither he nor any administrator having commercial interests in cricket can contest for BCCI posts.

The court order would mean Srinivasan cannot participate in the BCCI elections to be held six weeks from now unless he divests himself of all such commercial interests.

A bench headed by Justice T S Thakur made the observations while reading out its ruling on the Indian Premier League spot-fixing scam and conflict of interest issues involving Srinivasan, who was the managing director of a company that owned IPL team Chennai Super Kings (CSK) during his stint as BCCI president.

However, the court gave Srinivasan a clean chit on allegations of covering up misdeeds in the sixth edition of the cash-rich Indian Premier League (IPL).

The court also observed Srinivasan's son-in-law Gurunath Meiyappan and Rajasthan Royals co-owner Raj Kundra were involved in betting during the tournament, and set up a three-member committee headed by ex-chief justice R M Lodha to decide the punishment on Meiyappan and Kundra.

Srinivasan, Meiyappan, Kundra and cricket administrator Sundar Raman were probed by the Justice Mukul Mudgal committee in connection with the scam. The panel found "some misdemeanour by certain persons" and indicted them.

Delivering its ruling in the case, the bench said the functions of the BCCI were in the public domain and amenable to judicial law.

It noted that Srinivasan was permitted to own an IPL team by tweaking BCCI rules when he was president, and observed that this practice "is bad".

The apex court struck down the amendment which allowed Srinivasan to buy stake in an IPL team. It also said the BCCI did not adhere to prescribed procedures while conducting a probe in the scandal.

The country's cricket administration found itself in the dock following alleged betting and spot fixing in the IPL's 2013 edition.

On 17 December last year, a bench of Justices T S Thakur and F M I Kalifulla had reserved its verdict on the matter in which several interim directions have been passed since August 2013.

A key direction passed before was the setting up of a three-member committee headed Justice Mukul Mudgal, former chief justice of the Punjab and Haryana high court.

The conflict of interest regarding Srinivasan came under scrutiny because he was not only the BCCI president but also the managing director of India Cements, the company which owned CSK.

Meiyappan, identified by the inquiry committee as a team principal for the CSK franchise, was accused of betting on games of the T20 cricket league.

During the hearing, the Supreme Court asked Srinivasan to keep himself away from the affairs of the IPL.