Devendra Gangadharrao Fadnavis today took oath as the chief minister of Maharashtra, promising to usher in efficiency and transparency in administration while ensuring the ''right to service'' to citizens. 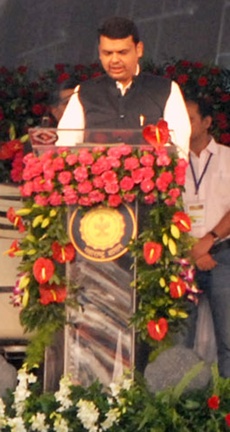 Fadnavis, who was elected BJP legislative party leader, will head the first Bharatiya Janta Party (BJP)-led government in the state.

The oath ceremony was held at a grand public function at Mumbai's Wankhede stadium, where governor CV Rao administered the oath of office and secrecy witnessed by over 30,000 people.

After the oath-taking, Fadnavis met his supporters and interacted with them. The BJP is reported to have continued celebrations all across Mumbai even after the ceremony at Wankhede got over.

Addressing the media at the Mantralaya after the swearing-in, Fadnavis announced that he would form a citizens charter in the state, adding, "Right to service is one of my key objectives. I will ensure transparency during my tenure."

"Efficiency and transparency go hand in hand. However, when we had efficiency we did not have transparency. I promise both," he added.

He also said he had asked every ministry to make presentations of policy decisions and the reason behind them.

Shiv Sena chief Uddhav Thackeray also attended the swearing-in ceremony of the Devendra Fadnavis government following a last-minute call from Amit Shah. He also held talks with the BJP president after the event. But it was not known what transpired at the brief meeting at the Wankhede Stadium premises.

Shah had reached out to a sulking Shiv Sena chief a day after the party announced its decision to boycott the ceremony on account of "constant humiliation" by BJP over government formation.

Fadnavis was appointed as CM of the state after he was elected leader by the legislative assembly members of the BJP, which had emerged as the single largest party in the 288-member Maharashtra assembly with 122 seats (but one of its MLAs Govind Rathod died), in the elections held in October 2014.

The Shiv Sena finished second with 63 seats. The Nationalist Congress Party (NCP), which emerged victorious in 41 seats, has offered the BJP external support to form the government in the state.

He was the second youngest mayor elected in India, when he served as the mayor of Nagpur at the age of 27, in 1997.

He is also the only person to be re-elected as the Mayor in Council in Maharashtra.