President Dilma Rousseff was elected for another four-year term in a narrow re-election victory, leading to a fall in the country's financial markets on doubts whether she can restore confidence in the economy. 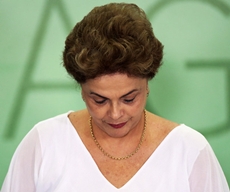 After Sunday's polls gave President Dilma Rousseff of the left-wing Worker's Party (PT), another term in office, Brazilians are wondering whether her next government will be able to pull the economy together and maintain political support in a sharply divided nation.

Rousseff overcame dissatisfaction with a sluggish economy and poor public services to clinch a second term by a slim margin, dashing the hopes of investors and nearly half the electorate who bet on her pro-business challenger.

In the most divisive and tightest campaign since Brazil returned to democracy three decades ago, Rousseff won 51.6 per cent of votes in a runoff against centrist Aecio Neves, who won 48.4 per cent votes.

Rousseff now faces the challenge of making good on a promise to expand social benefits for the poor while balancing a strained federal budget.

Brazil's benchmark Bovespa stock index fell around 5 per cent in early trading, while Brazil's real currency slumped 3 per cent to a nearly six-year low amidst investor fears that Rousseff may not be able to pull off a swift recovery after four years of ineffective industrial policies.

While Rousseff and her finance minister had earlier shruged off market pessimism as tantrums by speculators, investors are now awaiting a replacement for the beleaguered Guido Mantega, her outgoing finance minister.

They hope for a more market-friendly minister who can help restore fiscal discipline, bring transparency to the federal budget and better engage with business leaders.

There is still hope that Rousseff will be forced by economic realities to soften some of her interventionist policies.

Rousseff used the fruits of a commodity-fueled economic boom in the last decade, to expand welfare programmes that helped lift more than 40 million people from poverty despite the current economic woes.

Still, about 40 per cent of Brazil's 200 million people live in households earning less than $700 a month, and it was their overwhelming support that gave Rousseff victory on Sunday.

Now, she pledges to deepen social benefits while working to revive an economy that fell into recession this year.

However, speaking to a relieved crowd of supporters on Sunday night, Rousseff seemed to acknowledge the call for change expressed by many voters.

"I know that I am being sent back to the presidency to make the big changes that Brazilian society demands," she said after winning the runoff with 51.6 per cent support. "I want to be a much better president than I have been until now."