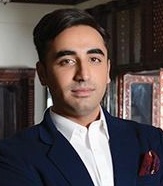 A protest march organized in the heart of London by a UK-based pro-Pakistan group on the Kashmir issue proved a damp squib and ended in near-chaos despite (or perhaps because of) the presence of Pakistan Peoples' Party (PPP) chairperson Bilawal Bhutto Zardari.

Only a few hundred people gathered to wave placards and flags in the so-called 'Million March' from Trafalgar Square to Downing Street. The occasion descended into chaos even as Bilawal Bhutto stepped on to the makeshift stage to speak.

The crowd began booing and throwing empty plastic bottles at Bhutto, who was later led away under protection. The police stepped in and ended the rally.

"This march was to be about Kashmir and for the welfare of Kashmiris. Bilawal has no business being here," said a group of angry protesters who had travelled from Derby in the East Midlands region of England.

The march was led by Barrister Sultan Mahmood Chaudhry, referred to as a former prime minister of Pakistan-occupied Kashmir (PoK), and was supported by Mirpuri-origin British parliamentarian Lord Nazir Ahmed of Rotherham.

While the group had claimed overwhelming support from various communities for the march, others had dismissed it as being ''against the national interest of the people of J&K".

The memorandums issued by the protesters urged both India and Pakistan to "respect the fundamental human rights of all citizens of J&K".