Vedanta chief Anil Agarwal to donate 75% of wealth to charity 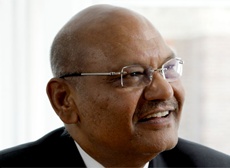 Anil Agarwal, the billionaire group chairman of Vedanta Resources Plc, announced late yesterday that he and his family would give 75 per cent of their wealth to charity.

The announcement from the one-time scrap metal dealer came at an event in London to mark the 10 year anniversary of Vedanta's listing on the London Stock Exchange.

According to Forbes' estimates, the 61-year-old Indian entrepreneur has a net worth of $3.5 billion.

With the announcement, Agarwal joins the lengthening list of Indian industrialist philanthropists, which includes  Azim Premji of Wipro, Mukesh Ambani of Reliance Industries and Shiv Nadar of HCL.