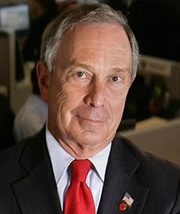 Bloomberg LP, the media company that operates lucrative data terminals for financiers as well as an extensive journalism empire, said yesterday that current president and CEO Daniel L Doctoroff would step down at the end of the year, and former New York City mayor Michael Bloomberg would resume executive control of the company that he founded in 1981.

According to the company, Michael Bloomberg, who still owned around 90 per cent of the privately-held company, would not name a replacement, as he planned to run it with the support from other company executives.

Doctoroff, 56, a close friend of Bloomberg had served as his deputy mayor.

After leaving the Bloomberg administration in 2008 he joined Bloomberg LP as president and was elevated to the post of the CEO in July 2011.

Bloomberg said it was a sad day for him and his company as he wanted Doctoroff to stay and continue.

After leaving the mayor's office at the end of last year, it was widely expected that Bloomberg would spend some time at the company's offices or engage himself with advocacy efforts.

Bloomberg would assume charge of a company that was significantly bigger and more powerful than the one he left over a decade ago, however, it also perhaps faced more challenges, The New York Times reported.

It said Bloomberg LP finds itself at a crossroads of sorts, developing new businesses in the hope of affording greater accessibility to a broader consumer audience.

Under Doctoroff, who joined Bloomberg LP only six months before the financial crisis hit in September 2008, the company's revenue vaulted over $9 billion, from $5.4 billion.

Subscriptions to Bloomberg's signature financial-data terminals - which rent for about $20,000 a year had shot to 321, 000, from 273,000, even as the financial sector declined. And while many newsrooms dwindled, Bloomberg added over 500 reporters and editors during his tenure.

However, the growth of the company had slowed especially abroad and its news division came under criticism last year in the face of accusations that it withheld a report about government corruption in China to protect its business interests there.

In another development, the company came under attack after acknowledging that its reporters used the company's terminals to access subscribers' private information.