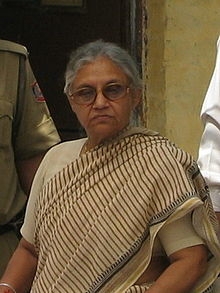 Days after she resigned as Kerala governor, a court in New Delhi today slapped a Rs3-lakh fine on former Delhi chief minister Sheila Dikshit, for failure to appear before it in a defamation case filed by her against BJP leader Vijender Gupta.

This is the second time she has been fined in the case. The metropolitan court had earlier imposed a fine of Rs5,000 on Dikshit for her non-appearance, which she paid in January this year.

Imposing the fine, metropolitan magistrate Neha Paliwal directed that out of Rs3 lakh, Rs2 lakh be deposited with Delhi State Legal Services Authority (DLSA) and Rs1 lakh be given to Gupta.

The court has now directed Dikshit to appear before it on 20 December, when the case will be heard next.

After resigning as Kerala governor on Tuesday, Dikshit had moved an application in the court seeking a day's exemption from personal appearance on the ground that she was pre-occupied with some political work.

Gupta's advocates Anil Soni and Harish Katiyal, however, opposed the plea saying the court had earlier directed Dikshit to appear before it on Saturday without any fail or excuse and she was deliberately trying to delay the matter.

They said, the fact was that Dikshit has no case against the BJP leader.

On the last date of hearing, the court had fixed the hearing for Saturday on the request of Dikshit's counsel who had said that she would appear 'on any Saturday in August'.

Dikshit had not appeared in the court on the last date of hearing also citing official tour.

The court, on 6 August last year, had framed criminal defamation charges against Gupta in the complaint filed by Dikshit.

Dikshit in her complaint had alleged that Gupta had used "uncivilised" language against her in the run up to the MCD polls in 2012 while accusing her of helping and conniving with power companies.