Bharatiya Janata Party general secretary Amit Shah, known to be a confidante of Prime Minister Narendra Modi, is likely to be anointed as the next BJP president at the party's parliamentary board meeting on Wednesday, reports today said. 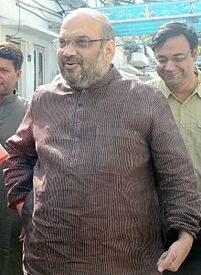 Shah has been given credit for leading the party to thumping victory in Uttar Pradesh in the Lok Sabha elections this year. The BJP and its allies won a record 72 out of 80 seats in the state.

With assembly elections due in Maharashtra, Haryana and Jharkhand this year, Shah seems to have scored over rivals like J P Nadda and Om Prakash Mathur to the post.

When Modi was chief minister of Gujarat, Shah served as his home minister, but had to resign in 2010 after he was alleged to have sanctioned a fake encounter by the state police, which saw three Muslims being killed by officers who claimed they were terrorists planning to assassinate Modi.

Shah also faces murder charges for sanctioning the extra-judicial killing of Sohrabuddin Sheikh, a small-time criminal, along with his wife and a potential witness.

During the campaign for the national elections, Shah was banned by the Election Commission from rallies and speeches after it found him guilty of delivering "hate speeches" designed to promote "hatred and ill will" between religions.

The ban was lifted after Shah vowed in writing that he would not "use abusive or derogatory language in the campaign".