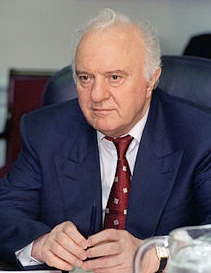 Eduard A Shevardnadze, 86, the USSR's last foreign minister prior to its break-up in 1999, died today following a protracted illness.

After the break-up of the Soviet Union, Shevardnadze led his native Georgia from 1992 to 2003 through its turbulent start as an independent state, following a bloody coup against Georgia's first president, Zviad Gamsakhurdia.

The prime minister of Georgia, Irakli Garibashvili, praised Shevardnadze for his ''important role in finishing the Cold War and founding a new world order.''

Shevardnadze, a committed communist from a communist family who had spent his working life as a communist official was asked by Gorbachev to manage the foreign policy of the Soviet Union in 1985.

Taken completely by surprise, Shevardnadze demurred saying he had no experience in diplomacy, other than playing host to foreign delegations as the top communist official in the Soviet republic of Georgia.

''The issue is already decided,'' Gorbachev answered, Shevardnadze wrote in his memoirs, ''The Future Belongs to Freedom'' (1991).

''The decision to make Shevardnadze foreign minister was the first obvious display of Gorbachev's remarkable political creativity,'' Robert G Kaiserm managing editor of Washington Post wrote in Why Gorbachev Happened: His Triumphs, His Failure, and His Fall (1991).

Gorbachev and Shevardnadze went about revolutionising Soviet foreign policy, withdrawing troops from Afghanistan, where the Soviet Union had got embroiled in a fruitless war; negotiated treaties on medium-range and strategic nuclear arms; withdrew military forces from Europe and the China border. The duo played an instrumental role in the reunification of Germany; and accepted human rights as part of policy discussions.

In 1992, Shevardnadze became the head of state Georgia after its break up with the Soviet Union.

Though he led the country out of instability and civil war, in November 2003 he was deposed in the "Rose Revolution" sparked by opposition allegations of irregularities in parliamentary polls, BBC reports.

Born in 1928 in the city of Lanchkhuti, Shevardnadze joined the Communist Party's youth movement in 1946 and rose to head the party in Georgia in 1972.

According to Gorbachev who spoke to the Russian Ekho Moskvy radio station Shevardnadze was a "very capable, talented man, very much predisposed to working with people, with all strata of society".

His final years were spent in quiet retirement in Georgia's capital, Tbilisi.