Murthy steps down as Infosys chairman for a second time 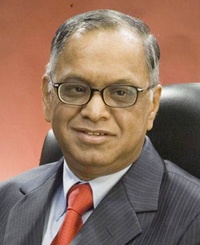 NR Narayana Murthy today stepped down as executive chairman of Infosys Ltd, for a second time, a year after he returned to revive the sagging fortunes of the iconic company he co-founded with four other techies in 1981.

Nearly two years after Murthy retired from the $8.3-billion IT bellwether in August 2011 on turning 65, the company's board prevailed upon him to return on 1 June 2013 for a five-year term to rejuvenate the company (See: Analysts cautiously welcome Murthy's return to Infosys).

Murthy' second term at the helm, however, saw an exodus of its top top executives and as the first year of a 5-year tenure came to a close, Infosys got its first outsider CEO, Visha Sikka, allowing Narayana Murthy to step down from the top executive post.

Narayana Murthy, chairman emeritus of Infosys, today said at the company's 33rd AGM that this was his ''last appearance as chairman.''

He said the company posted a growth rate of 24 per cent in terms of rupee earnings for the financial year ended 31 March 2014 and that the revenue growth doubled from 5.8 per cent to 11% in 2014

"The company paid an interim dividend of Rs20 per share in October 2013," he said. Total dividend paid this year stood at Rs 3,618 crore

He said that the CEO nomination selection process was second to none in terms of transparency and rigour.

"Infosys raised salaries of employees twice in FY14," he said.

On the exodus of top executives, he said some of these were low performers and that the company went out of its way to retain the high performers.

However, it was the dramatic appointment of former SAP technocrat Vishal Sikka as the global software major's first outside chief executive that helped Murthy to call it quits (Former SAP executive Vishal Sikka to head Infosys).

"I decided to exit a year after my return to ensure a smooth transition of responsibilities to the new management and give a free hand to Sikka for steering Infosys into future as a marquee Indian brand in the technology space," Murthy told IANS ahead of the company's 33rd annual general meeting (AGM) later in the day.

The Infosys board also appointed K V Kamath as non-executive chairman from 11 October 2014.