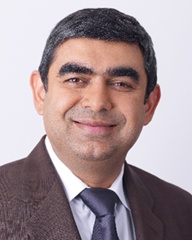 Sikka, who holds a PhD in computer science from Stanford, will be inducted as a whole-time director of the board and CEO & MD (Designate) on 14 June 2014. He will take over from S D Shibulal, the current CEO and one of the founding members of Infosys, on 1 August 2014, the company said in a statement issued on Wednesday.

''I am honoured to lead Infosys, an iconic company built by pioneers in the technology industry. I look forward to working with and learning from talented Infoscions around the world, Sikka said commenting on his appointment.

''We, at Infosys, have a unique opportunity to deliver breakthrough solutions that will bring greater value to our clients, employees, investors and other stakeholders. I am grateful to the Infosys Nominations and Governance Committee, Mr. Kamath, Mr. Murthy and the board for this opportunity,'' he added.

K V Kamath will become the non-executive chairman of the board on 11 October 2014.

Murthy will be designated as Chairman Emeritus with effect from 11 October 2014 in recognition of his contributions to the company.

S D Shibulal the current CEO and MD and Srinath Batni, whole-time director of the company, will step down from the board on 31 July 2014.

In addition, the company has elevated twelve leaders to the position of executive vice president with additional responsibilities.

''I am pleased with the selection of Dr. Vishal Sikka as our new CEO.'' said executive chairman N R Narayana Murthy. ''Vishal brings valuable experience as a leader of a large, global corporation. His illustrious track record and value system make him an ideal choice to lead Infosys. On behalf of all of us at Infosys, I would like to thank Mr. Gopalakrishnan, Mr. Shibulal and Mr. Batni for their contributions.''

''Vishal brings a unique combination of technology prowess and business acumen. The board is committed to support him to strengthen the company's leadership in the global technology industry,'' K V Kamath, lead independent director and chairman of the nominations and governance committee, said.

''I am glad that the board has chosen a thought leader who has demonstrated how technology can be leveraged to help businesses become more competitive. I wish him all the best,'' S Gopalakrishnan commented.

S D Shibulal remarked, ''I believe that Vishal brings the vision and capability we need to take Infosys to greater heights.''

Vishal Sikka was, until recently, a member of the executive board of SAP AG, leading all products and driving innovation globally. He has worked closely with leaders of global companies in building breakthrough business solutions.

At SAP, he was responsible for all products, from traditional and cloud-based applications to technology and platform products, including HANA, analytics, mobile and middleware. In addition, Sikka led multiple initiatives to accelerate innovation and research at SAP.